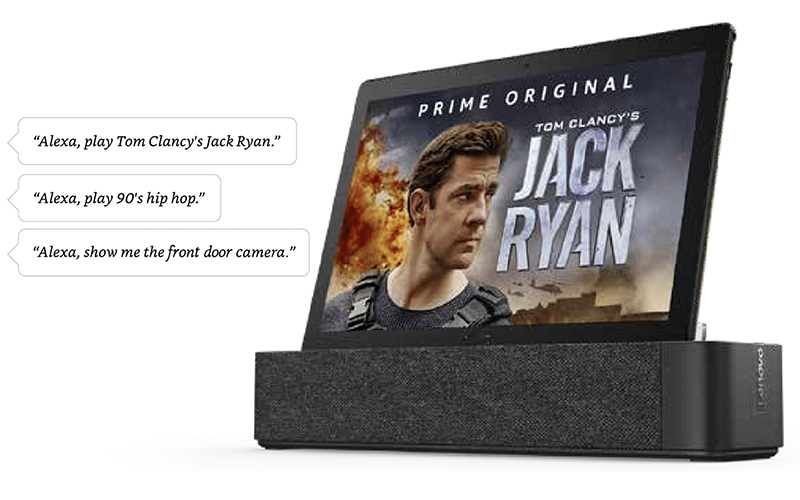 Lenovo continues to flesh out the smart home ecosystem with a range of new devices. In addition to the Smart Clock, the company also announced its Smart Tab, a new series of 2-in-1 tablets that also double as fully functioning smart displays with Amazon Alexa built in.

The Smart Tab can function as standalone Android tablets, but when they interface with the Smart Dock, they enter Show Mode and transform into a smart screen not unlike the Smart Display Lenovo announced at CES last year.

The P10 is the more premium device, sandwiched as it is between two slabs of glass. It also features an all-metal frame and is slightly lighter than the M10 at 440g (the M10 weighs 480g).

In addition, the P10 comes with four front-facing speakers, while the M10 has just two. Its display is also brighter, with a peak brightness of 400 nits compared to the M10's 320 nits.

However, both devices are powered by the same octa-core Snapdragon 450 processor and run Android Oreo. The P10 does have more memory though, featuring 4GB of RAM versus the 3GB on the M10.

Lenovo has also crammed a larger 7,000mAh battery on the P10, while the M10 makes do with a 4,850mAh pack. However, the battery life numbers are the same on both tablets, sitting at over 15 hours of 720p video playback, according to Lenovo.

The Smart Dock that both tablets ship with are equipped with three far-field microphones, so you can talk to Alexa from across the room. You can ask Alexa for information on the weather, traffic conditions, and even your schedule for the day. It'll come in useful in the kitchen as well, and Lenovo envisions users making use of instructional videos and asking Alexa to buy the necessary ingredients.

With the Smart Dock, the Smart Tabs essentially can do everything you'd expect of a regular smart display. This means serving as a hub for the smart devices in your home, so you can instruct it to play music, stream movies from Prime Video, or even monitor your home security feeds.

You can think of the Smart Tab as a more versatile smart display. It's not really bringing anything new to the table, but you do get a nice bit of versatility with an Android tablet that you can take out with you.

The Smart Tab P10 and M10 start at US$299 and US$199 respectively and will be available for pre-order this month.