Lenovo's Yoga tablets are instantly recognizable thanks to their unique cylindrical battery design that allows Lenovo to fit a larger battery and also integrate a kickstand within the tablets itself. At IFA 2015, Lenovo has just updated its Yoga tablet lineup with new processors from Qualcomm and Intel, and there are three new models in all. There's a single Yoga Tab 3 Pro and two Yoga Tab 3 models. Let's take a look at them now. 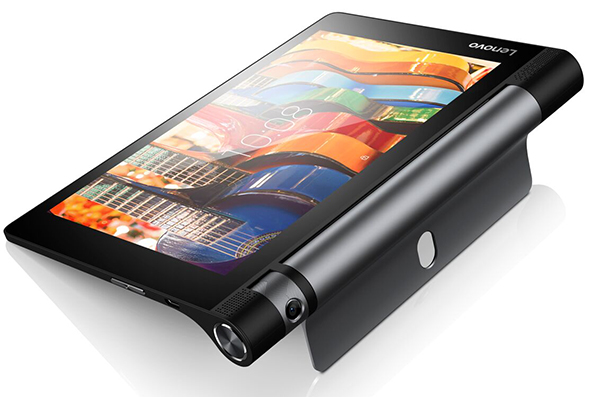 Like last year's Yoga Tablet 2, the new Yoga Tab 3 will be offered in two sizes - 8 inches and 10 inches. Apart from the display size and battery capacities, the two models are identical. Both models will feature Android 5.1 Lollipop.

Last year's Yoga Tablet 2 was powered by Intel Atom processors, but Lenovo is switching to Qualcomm processors for the new Yoga Tab 3, specifically the quad-core Qualcomm APQ8009 that runs at 1.3GHz. Both models will also get 1GB of RAM and 16GB of internal storage. A microSD card slot will offer storage expandability of up to 128GB.

Both models will also feature a rotatable 8-megapixel camera and Dolby Atmos audio technology with front-facing speakers. I/O connectivity comes in the form of a single micro-USB port, and wireless 802.11n is supported along with Bluetooth 4.0.

And like all the Yoga tablet models before, the new Yoga Tab 3 tablets will have an integrated kickstart and will support multimode usage such as stand, tilt and hang. 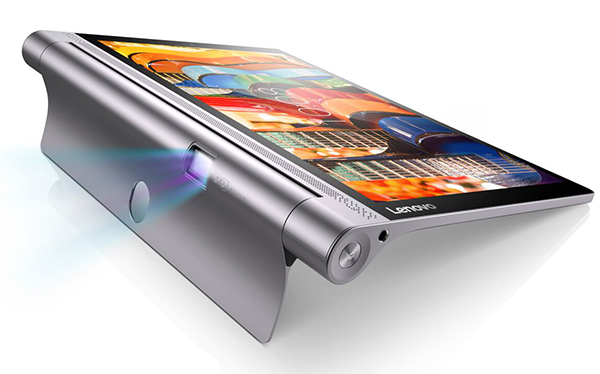 The Yoga Tab 3 Pro can be thought of as a more feature-packed version of the regular Yoga Tab 3 tablets. And like them, the Yoga Tab 3 Pro has a cylindrical battery design with an integrated kickstand that allows it to be used in multiple positions - stand, tilt and hang.

Unlike last year's Yoga Tablet 2 Pro which had a large 13.3-inch display, the Yoga Tab 3 Pro has a more manageable 10.1-inch display that supports QHD (2560 x 1600 pixels) resolution, which means a pixel density count of 299 pixels per inch. This almost rivals other premium tablets like the iPad Air 2 (324 ppi).

The Yoga Tab 3 Pro will run Android 5.1 Lollipop and is powered by Intel's new Cherry Trial Atom processor, specifically the mid-range quad-core Atom x5 Z-8500 that runs at 1.44GHz. It has 2GB of RAM and comes with either 16GB or 32GB of internal eMMC storage. It will also feature a microSD card slot allowing storage expandability of up to 128GB.

However, arguably the coolest thing about the Yoga Tab 3 Pro is the built-in 70-inch projector, which is great for sharing videos and watching movies. To add to the cinematic experience, the Yoga Tab 3 Pro also features a 4-speaker JBL speaker system that lets it work as a soundbar.

No word yet on local availability and pricing, but Lenovo did say that the Yoga Tab 3 Pro will go on sale this November for US$499 (S$705).

Join HWZ's Telegram channel here and catch all the latest tech news!
Our articles may contain affiliate links. If you buy through these links, we may earn a small commission.
Previous Story
Lenovo's Y series introduces new gaming machines and gear
Next Story
Oppo to announce 5.5-inch Find 9 on 19 September?