Mickey and Minnie, sitting on a tree…

LEGO is bringing the original, iconic designs of Mickey and Minnie Mouse back in brick form! The Disney stars will soon be available in a buildable set. They’re rather large too, with Mickey standing 36cm tall and Minnie 35cm high. If you’re a fan of Disney memorabilia, this should be right up your alley.

These large-scale buildable figures can be dynamically posed, and come with an assortment of accessories to be posed with. These include a retro camera, a guitar and a photo album displaying the duo’s many adventures in the good old days. They stand on a base that harkens back to old-timey film reels, flourished with the original character signatures. 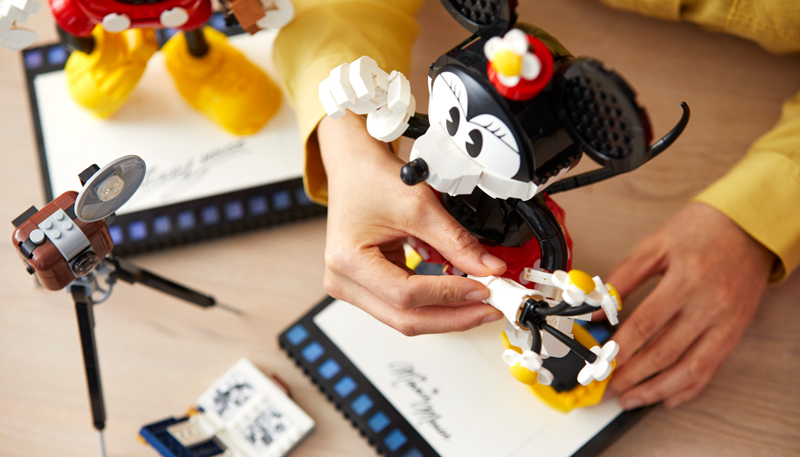 The set consists of 1,739 Lego pieces. Here’s what Lego designer Ollie Gregory had to say about the set:

We always look to design things that people would like to put on their shelf, including my own, which is why we went for the ‘classic’ Mickey Mouse design with the iconic silhouette and colour palette – as a surprise for builders, the characters' insides are built from colourful elements inspired by classic outfits worn by the pair in the past. The Mickey Mouse and Minnie Mouse Buildable Characters are extremely detailed and intricate, and there were lots of challenges to overcome. For example, to create the tips of their noses we even had to bring back the LEGO Classic Space Helmet in black, which hasn’t been seen since 1987. LEGO fans will also notice that we have debuted a new colour in this set, 363 – TR. Brown with Opalesence, the first time it is included in any set – so there’s lots to explore with this build!

Here’s something not so adorable: the price. You can grab this nostalgic Disney-themed Lego set for a whopping S$279.90! The buildable set will be available in Lego Certified Stores in Singapore from July 1, 2020 onwards. At least you have some time left to save up for it?

Previous Story
The Red Bull Mobile Esports Open kicks off in Singapore with PUBG Mobile
Next Story
Designed in SG, BondCable is a charging cable that coils up for easy storage