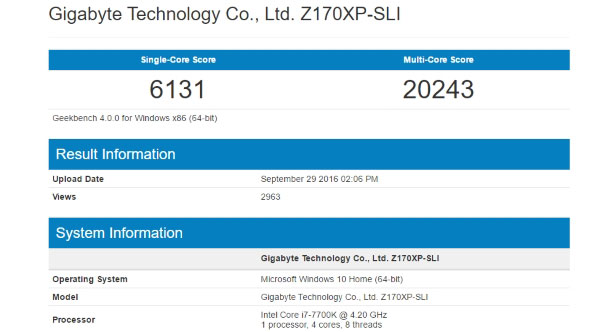 Intel’s Kaby Lake desktop processors aren’t due till early 2017 (mobile processors have already been announced), but leaks have already popped up online as to the rumored performance of the seventh-generation Intel Core i7-7700K chip. And boy is the news good. If the figures are to be believed, the quad-core Kaby Lake CPU could serve up performance on the same level as the six-core Intel Core i7-6800K Broadwell-E processor, potentially delivering enthusiast performance in a more mainstream part.

The leaked Geekbench 4.0.0 benchmark reportedly shows the quad-core Kaby Lake CPU posting similar multi-threaded performance as the Core i7-6800K, which is actually a six-core, 12-thread chip. The former posted a single-core score of 6131 and multi-core score of 20243, compared to 4357 and 20261 respectively for the Broadwell-E chip.

It’s also worth noting that the benchmark was carried out on a Gigabyte Z170XP-SLI motherboard instead of a board based on the upcoming Z270 chipset (although there aren’t likely going to be significant differences between the two). ASUS and MSI have already announced BIOS updates to bring their existing 100-series boards up to speed with Kaby Lake support, and it looks like this is the case for Gigabyte as well.

Still, the Core i7-7700K's high scores could be due to it being clocked a lot higher, with the leaked screenshots showing it running at 4.2GHz, compared to the 3.6GHz on the Broadwell-E chip. Furthermore, there’s no way of knowing if that is actually the stock speed of the Kaby Lake chip and the benchmark could have been carried out on an overclocked CPU.

On top of that, Geekbench isn't necessarily the best indicator of real-world performance as it doesn't properly account for things like branch mispredictions.

Caveats aside, this still bodes reasonably well for Kaby Lake, but we’ll have to wait till next year to verify its performance.

Join HWZ's Telegram channel here and catch all the latest tech news!
Our articles may contain affiliate links. If you buy through these links, we may earn a small commission.
Previous Story
NParks urges Niantic to remove off-trail Pokéstops from nature reserves
Next Story
Seagate's Backup Plus Hub is a external hard drive that doubles as a USB hub