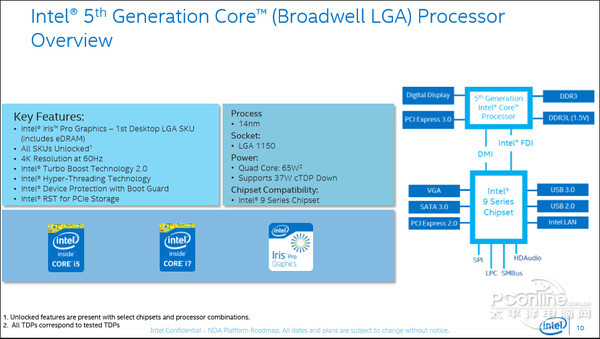 According to a leaked Intel roadmap posted on Chinese website PConline, both Broadwell and Skylake CPUs are slated for a mid-year launch. In addition, the roadmap also details the company’s plans for the new 14nm desktop processors. 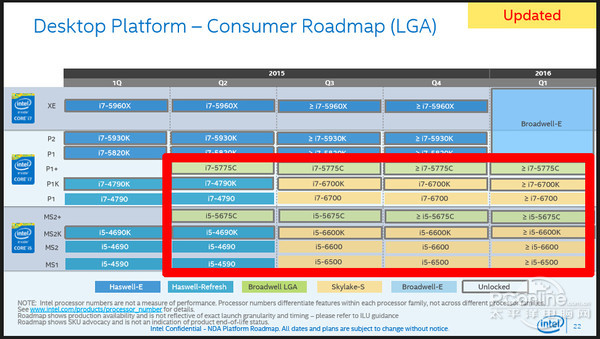 If the leaked information is true, it confirms Intel is dropping the “K” series branding for the upcoming Broadwell desktop processors, namely the Intel Core i7-5775C and Intel Core i5-5675C. The Chinese website PConline.cn also highlighted some technical specifications of the Broadwell desktop CPUs. For a start, they will feature the Fully Integrated Voltage Regulator (FIVR) that is featured in Intel Haswell processors. However, with the 6th generation Skylake CPUs, the FIVR technology will be abandoned and this is most likely to reduce the heat buildup caused by the on-die FIVR circuitry. The 5th generation Broadwell processors will have updated instructions sets that include ADCX and MUL. RDSEED. The last instruction set RDSEED will enable the processors to generate 16-, 32-, 64-bit wide random numbers, which are generally used for data protection. The website didn’t delve into details about the RDSEED extensions but we do know the current Haswell processors are also capable of handling their instructions.

The integrated graphics engine of the Broadwell CPUs will be branded as Iris Pro 6200. They come with 48 execution units, with 128MB eDRAM. The site also mentioned the eDRAM can be accessed by the CPU cores as some sort of L4 cache! The new graphics engine has support for Microsoft DirectX 12 technology and VP8, a video compression format that is owned by Google. Besides improving graphics performance, the Broadwell chips are purported to have Hi-Z support baked in, allowing them to drive audio equipment with impedances from 600ohms upwards. Besides the desktop CPUs, the site also revealed the operating specifications of three BGA Broadwell chips that are suited for all-in-one systems. Targeting the enthusiast market segment, Broadwell-E processors are expected to be launched in Q1 2016 to replace the current crop of Haswell-E chips.

There are a total of five 14nm Skylake-S CPUs mentioned in the roadmap; they are the Intel Core i7-6700K, Core i7-6700, Core i5-6600K, Core i5-6600, and Core i5-6500. The “K” branding is used for the unlocked Skylake processors. If the roadmap goes according to plan, we will be witnessing an unprecedented situation where Intel launched both 5th generation Broadwell and six-gen Skylake processors at the same time.

Join HWZ's Telegram channel here and catch all the latest tech news!
Our articles may contain affiliate links. If you buy through these links, we may earn a small commission.
Previous Story
12.9-inch Apple iPad Pro to have Bluetooth stylus, Force Touch and NFC?
Next Story
Mophie announces launch of Juice Pack line for iPhone 6 and iPhone 6 Plus