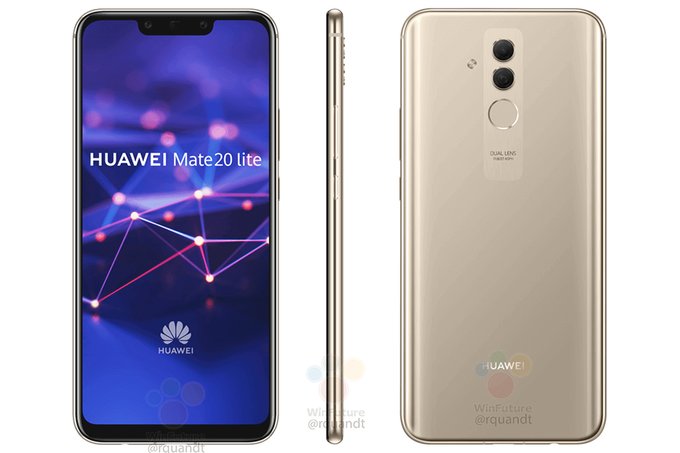 Huawei's next flagship smartphone, the Mate 20, is expected later this year. In the meantime however, leaked images of the 'Lite' version of the flagship have appeared online. The phone appears to be quite similar to the Honor Nova 3i (much like how the current Huawei Mate 10 Lite is basically a re-branded Nova 2i) but with a different dual rear camera setup that is located in the middle instead of the top-left corner.

The Mate 20 Lite images were leaked by tipster Roland Quandt, who claims that the phone will feature the same 6.3-inch Full HD+ notched display and mid-range Kirin 710 processor as the Nova 3i.

According to Quandt, the Mate 20 Lite will have a higher resolution rear camera pairing a 20-megapixel f/1.8 lens with a 2-megapixel lens. The front camera will be the same 24-megapixel and 2-megapixel pairing found on the Nova 3i. The battery will also be slightly larger than the Nova 3i at 3,650mAh.

Quandt says that the Mate 20 Lite is expected to cost around US$400, which would make it quite a bit more expensive than the Nova 3i.

Join HWZ's Telegram channel here and catch all the latest tech news!
Our articles may contain affiliate links. If you buy through these links, we may earn a small commission.
Previous Story
Likely specs of Galaxy S10's triple-lens camera revealed
Next Story
A camera without limits: A closer look at the Sony Xperia XZ2 Premium