Leaked: Four more new phones from Huawei and Xiaomi in the coming months 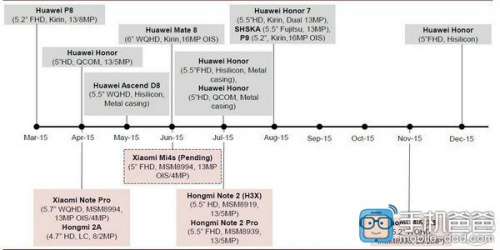 If you think you have seen enough of new phone launches this year, be prepared for more coming your way in the next few months.

According to a leaked product roadmap published by Chinese site Mobile-Dad, both Huawei and Xiaomi are slated to launch at least four new smartphones starting from next week. Huawei is expected to announce the Ascend D8 next Friday, 15 May which comes with a 5.5-inch WQHD display and a metallic chassis. Here's the list of upcoming phones, their reported specs and stated launch dates:

It is important to note that this product roadmap could only be for the Chinese market and some models may not be available worldwide. However, it is highly likely to see at least the Ascend Mate 8 and Redmi Note 2 models making to our shores.