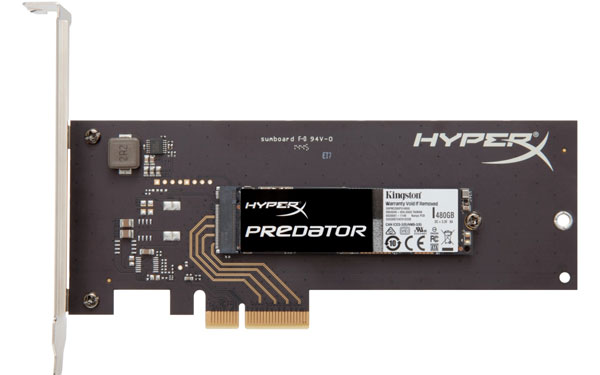 Unlike the HyperX Fury SSD which was based on the aging Sandforce SF-2281 controller and the SATA 3.0 standard, the HyperX Predator PCIe SSD has ditched SATA altogether in favor of the PCIe 2.0 x4 interface.

Of course, the gap in performance is to be expected given the much higher bandwidth offered by the new Predator’s PCIe-based interface. The new drive is powered by the Marvell 88SS9293 controller and comes in an M.2 form factor (80 x 22 x 3.5mm) which will fit motherboards with a M.2 2280 slot.

But even if your motherboard doesn’t have an M.2 slot, fret not. Kingston has thoughtfully included a half-height, half-length (HHHL) adapter to help the drive interface with the PCIe expansion slot on your board. Kingston clearly intends to cater to as wide an audience as possible, and it has even included both standard and low-profile brackets, the latter of which will definitely please mini-ITX and HTPC system builders.

Kingston will ship a different SKU for the drives that come with HHHL adapter and the M.2 SSD will be pre-mounted on it. It has also opted to skip over the 120GB capacity configuration and offer the drives in only 240GB and 480GB configurations. This is probably a smart move, as the falling price per gigabyte of SSD storage has seen 240GB capacity drives emerge as the new sweet spot in price to performance ratio. Furthermore, the target audience of the drive - enthusiasts and power users - are not likely to be interested in smaller configurations and may even find 480GB too little.

M.2 slots are also becoming increasingly common on the current crop of motherboards, and it’s good to see a major manufacturer abandon the 6Gbps limits of SATA 3.0 and support PCIe instead. The HyperX Predator PCIe SSD will ship with a three-year warranty. Watch for it in stores soon and we'll keep you updated once we're aware of local price and availability details.

Join HWZ's Telegram channel here and catch all the latest tech news!
Our articles may contain affiliate links. If you buy through these links, we may earn a small commission.
Previous Story
Intel Broadwell processors may finally be coming to desktop PCs
Next Story
Developers can now start building apps for Windows 10