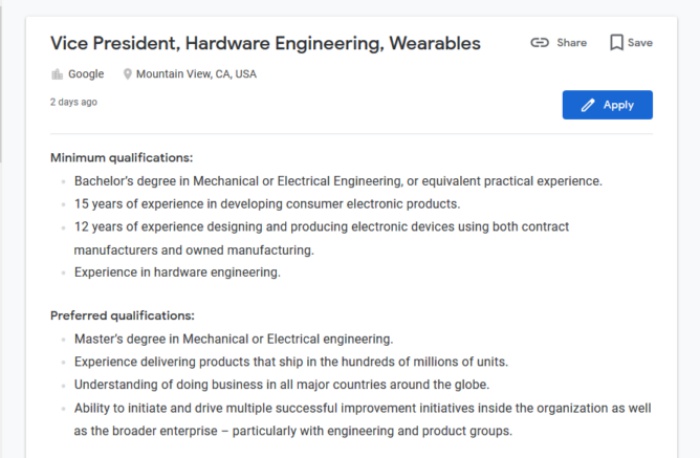 Google could be building its own wearable devices such as the Pixel Watch according to a recent job listing.

While the job listing has since been removed, Android Police has taken a screenshot of it. Google was apparently searching for a "Vice President of Hardware Engineering for Wearables" who would be responsible for the design, development and shipment of all Google's Wearable products. There is also another job listing for a "Wearables Design Manager".

Since Google's only current wearable product is the Pixel Buds, it is unlikely that the company is hiring a senior executive to manage the Pixel Buds lineup. This suggests that Google could be looking to expand its Wearable lineup which could include a Pixel Watch and other fitness trackers.

Although Google confirmed that it is too early to think of a one-size-fits-all watch, the company has entered into an agreement with Fossil Group to acquire US$40 million intellectual property (IP) in relation to a current smartwatch technology developed by the latter.

Could the job listing be related to this acquisition? Well, it seems that Google is getting serious about developing its own smartwatches to compete with Apple, Samsung and Fitbit.

Join HWZ's Telegram channel here and catch all the latest tech news!
Our articles may contain affiliate links. If you buy through these links, we may earn a small commission.
Previous Story
The US wants to equip its military with tiny spy drones measuring just 6.6-inches
Next Story
Press image of Nokia 9 PureView confirms an in-display fingerprint sensor