iPhone 5 Launches With A Bang in Singapore

iPhone 5 Launches With A Bang in Singapore

Each time Apple launches a new product, it is almost certain that there will be queues. The launch of the iPhone 5 today is no different, with queues snaking out from the telcos' shops and authorized Apple retailers across the island.

SingTel launched the iPhone 5 at a special event at Marina Bay Sands, Hall D, Basement 2 this morning at 8 am. According to SingTel, the first customer in the queue to purchase the iPhone 5 is Ms Liu Ting Ting (age 20, student) who arrived last night at 8.30 pm.

Even though she managed to secure an appointment with SingTel to purchase the handset, she chose to camp overnight in order to be the first to get the iPhone 5. Mr. Allen Lew (CEO, Group Digital Life) and Mr. Yuen Kuan Moon (CEO, Consumer Singapore) were on hand to present the phone to her.

At the event, SingTel also launched an updated version of deF!ND, its own voice-activated personal assistant app which is often dubbed the Singapore Siri. deF!ND was launched last November as the first smart mobile concierge app. It is available for download from the Apple App Store and the Google Play store. You can check out the video for more information on deF!ND.

StarHub also held a special launch event at its Plaza Singapura Shop at 8 am today. Mr. Chan Kin Hung, Head of Marketing and Products for StarHub, was present to flag off the event. Mr. Roger Leow is the first customer in the queue as he came at 5.30 am. The queue started sometime after 6 am.

The telco also went the extra mile by offering free breakfast for waiting customers. There was a makeshift cafe, complete with hot drinks dispensers and some light refreshments. 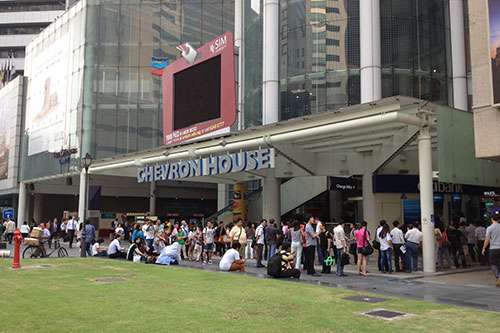 Besides the three telcos, authorized Apple retailers Nubox and Epicentre also started selling the iPhone 5 at its recommended retail prices today. This year marks the first time they are selling the handset on the launch day itself.

Nubox, an arm of Newstead Technologies, today launched the iPhone 5 at its 10 Apple Premium Reseller Stores. According to Nubox, queue poles were set up last night at 8 pm, with the first customer starting to queue shortly after at its Tampines Mall outlet.

Of its 10 Stores, Tampines Mall saw its longest queue of more than 200 customers. Demand for the iPhone 5 was so overwhelming that it sold out at all Nubox stores within 30 minutes.

We visited the Nubox Store over at Raffles City Shopping Centre where we interviewed the first pair of customers in the queue. 18-year-old polytechnic student Felix Haryanto William was the first in line with his father.

“My friends and I have been eagerly waiting for iPhone 5 since last December. I am an Apple fan and I just want the latest phone. We queued at Nubox for the launch of the new iPad in March and decided to come here again to queue for the new iPhone,” said Felix. (Source: Nubox.)

Evelyn Chua, Chief Marketing Officer for Newstead Technologies commented that she is very pleased with the sales at the 10 stores islandwide. She is also expecting strong demand for the new iPod Touch and iPod Nano that would be available at all Nubox stores soon. Customers can check out Nubox's Facebook page for the latest updates on the availability of the iPhone 5, the new iPods, as well as accessories at its stores.

We also dropped by the the Epicentre shop at Marina Bay Sands. When we arrived at 7.15 am, we counted nearly 120 people in the queue. Those at the front of the line said that they started queuing since 11 pm last night.

A similar scene was spotted at the Epicentre shop at 313@Somerset. At about 11 am, Epicentre announced that all iPhone 5 models were completely sold out in all eight stores.