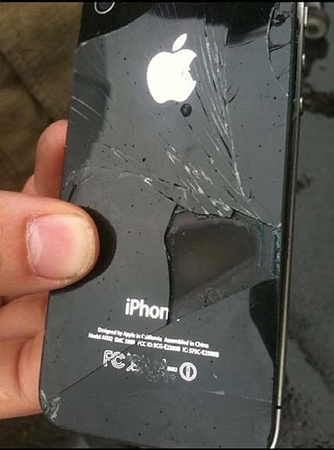 An iPhone 4/4S caused a small uproar on an Australian airplane last Friday after 'glowing red and emitting significant amounts of dense smoke', according to the Australian airline Regional Express. Thankfully, the damage was contained and no one was hurt.

The Register (UK) - A photo of the iPhone in question shows an iPhone 4 or possibly a 4S with the black plastic clearly burnt in an area on the lower right hand side and the glass shattered over the burn mark. According to phone tear-downs, the iPhone 4's battery sits just below the case in the right-hand side of the device and given the heat involved it is likely to be something to do with the battery.

According to a press release issued by the airline, the phone has been detained by the Australian Transport Safety Bureau for further analysis. Meanwhile, in a bid to understand the mystery, Mashable contacted Aaron Vronko, a service specialist at Rapid Repair, a self-made business that focuses on servicing and modifying Apple devices. He offers a similar, albeit more in-depth, explanation:

Mashable - Vronko said the Australian flight fiasco was most plausibly caused by a combination of a defect in the battery cell with a failure in the phone’s battery-temperature management system. This could have been caused by the phone’s owner playing a 3D game while simultaneously charging the phone.

While Vronko has also made mention that the case is likely to be an isolated one, Apple on the other hand, has yet to offer an official response to the various publications' queries.