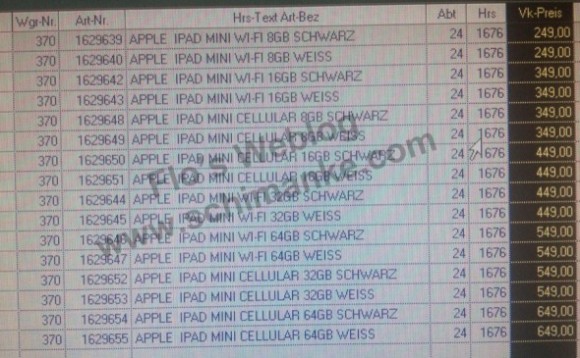 While it hasn't been made official yet, the alleged iPad Mini has been getting quite a fair bit of coverage. This time, the price list of the different iPad Mini variants seems to have made its way up on the Internet. First spotted by schimanke.com, this leaked piece of information gives us a sneak peek of what to expect, price-wise.

Slash Gear - "Internal storage options start at 8GB and go all the way up to 64GB, with Wi-Fi only and 3G variants of each model. Each one also comes in white and black, so if this listing is legitimate, customers will have a wide range of options to choose from. Have a look at a break down of the pricing below:

Jim Dalrymple of The Loop, has given his trademark "yep" comment on his website on the October 23rd iPad Mini launch information provided by AllThingsD's sources and the iPad Mini should likely be officially announced then. Of course, take these figures with a pinch of salt; after all, the iPad Mini was previously rumored to come with a lower and more competitive price tag of US$200 to US$250.