The new Intel Optane Memory H10 with solid-state storage packs better performance and capacity in a compact M.2 form factor. It is intended for thin and light notebooks as well as for computing platforms with space and cooling constraints. 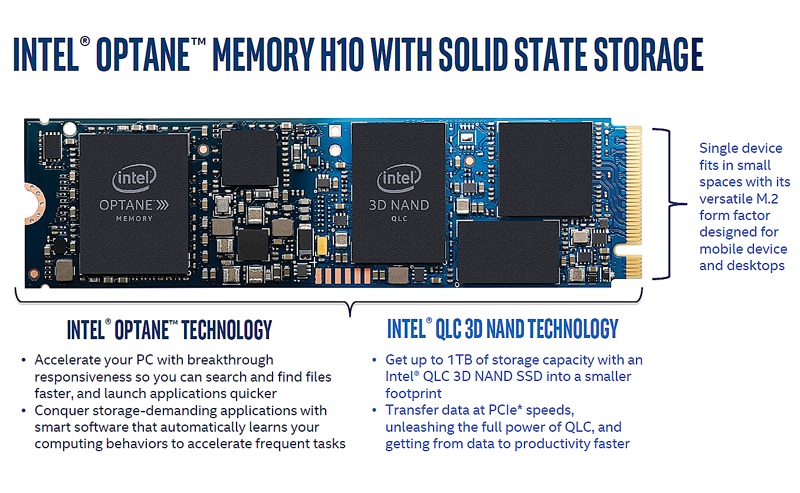 This single-sided M.2 2280 (2280-S3-M) storage drive supports the PCIe 3.0 x4 interface and is NVMe 1.3 compliant. One half of the device is the Intel Optane drive, while the other is storage based on Intel QLC 3D NAND. The H10 drive comes in the following capacities:- 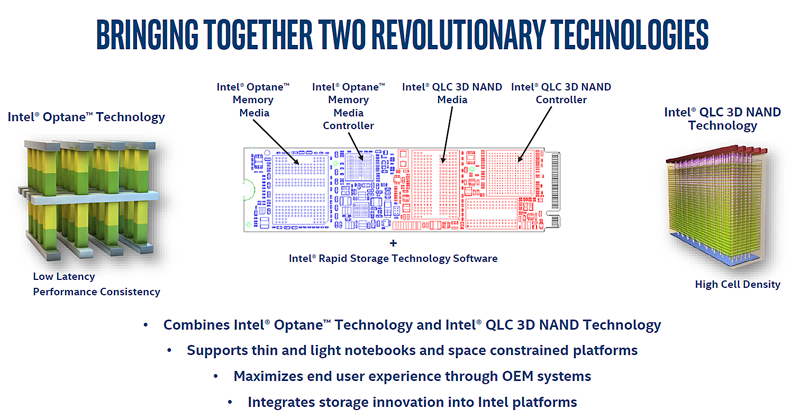 The storage space of the H10 drive is low in comparison with current traditional SSDs. Intel claims the strength of the H10 is its optimal performance at low queue depths, typically 1 to 2, and most application workloads happen at those queue depths - the same reason why we've typically run our older storage tests using IOmeter  benchmarks for queue depths up to 5.

According to Intel, at such low queue depths, the drive boasts of up to 55K for both read and write IOPs. Its sequential read and write speeds are 2,400- and 1,800MB/s respectively. The drive is rated up to 300 TBW for endurance and backed by a 5-year warranty. For everyday users, Intel's testing claims you can launch documents two times faster, launch games up to 60% faster and open media files up to 90% faster -- all while multitasking.

The Intel Optane Memory H10 with solid state storage is meant for OEM market segment and will be paired with 8th generation mobile Intel Core U-series CPUs and Intel Rapid Storage technology for the best performance. It’s ideal for myriad of tasks that range from office productivity, content creation and mainstream gaming.

Consumers will be able to find Intel Optane Memory H10 in notebooks from Dell, HP, and ASUS from Best Buy in the United States from Q2 of this year.