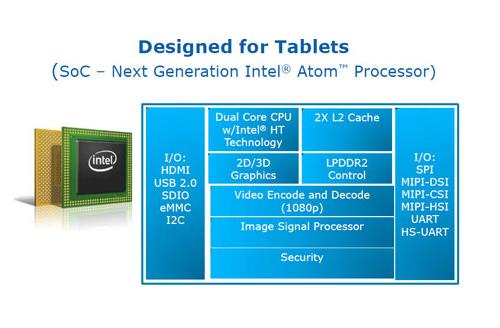 In an earlier statement made at this year's IDF, Intel said that its new Atom CPUs will not officially support the Linux operating system, presumably Android as well. With that stated stance, it has made the new Clover Trail series of Atom processors tailored exclusively for powering tablets operating on Windows 8 and Windows RT. The Clover Trail Atom CPU is essentially a 32nm duo-core Medfield processor and it supports more powerful graphics processing than the Medfield.

In an apparent turnaround by Intel, InformationWeek reported that the company has clarified its earlier statement by saying that the new Clover Trail series of Atom chips will support Windows 8 exclusively at their launch; however, "...Intel has plans for another version of this platform directed at Linux/Android.". We assume that there will be cheers of joy from the Linux and open-source communities. The Inquirer has wryly noted that if Intel had stuck to its initial stance, Intel and Microsoft may find that Clover Trail is a dead end.

Join HWZ's Telegram channel here and catch all the latest tech news!
Our articles may contain affiliate links. If you buy through these links, we may earn a small commission.
Previous Story
BIOSTAR Hi-Fi A85X Released
Next Story
5.0-inch Samsung Galaxy S 4 to Be Globally Available in March 2013? (Update)