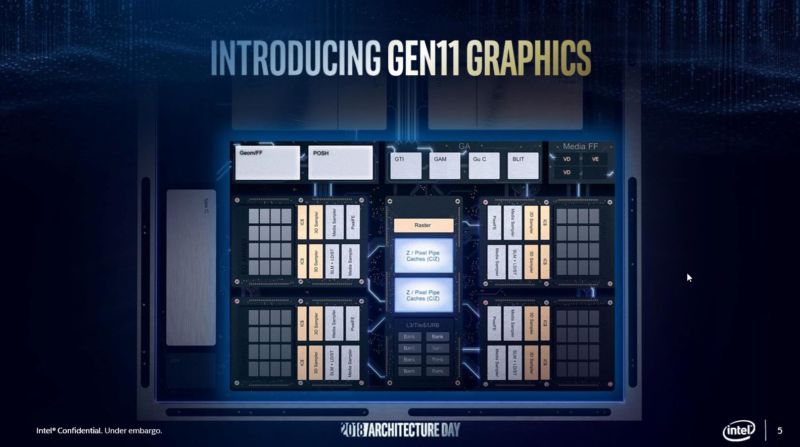 Integrated graphics are about to get a huge upgrade from Intel. The 11th-generation, or Gen11, GPU will serve up more than teraflop of computing power, finally opening up the possibility of a playable experience on several PC games without a dedicated graphics card.

Like the existing Gen9 chips, the Gen11 GPU will be arranged in blocks that combine execution units (EUs) with 3D hardware such as texture samplers. However, while the most widespread Gen9 GT2 configuration has three blocks of eight EUs each, for a total of 24, Gen11 has double the number at 16 EUs per block. It will also have configurations with four blocks, so it could have as many as 64 EUs.

That's more than double the EUs in Gen9 integrated graphics, and it's the greater number of EUs that are driving the newfound performance.

For some perspective, the PlayStation 4 has 4.2 TFLOPS of power, so integrated graphics no longer appear like they're miles behind mainstream gaming hardware today. Intel took the opportunity to show Tekken running on the GPU, and the game was actually playable at medium settings and a 1080p resolution.

As usual, the chip will have a media block comprising dedicated encoders and decoders for video, but Intel says it redesigned its HEVC/H.265 encoder from the ground up. The Gen11 GPU will now support streams up to 8K, in addition to HDR screens and Adaptive Sync variable refresh rate technology.

Intel is positioning the new GPU for its upcoming 10nm processors, so it seems like we may see it with the new Sunny Cove-based chips in 2019.

That said, even as it pushes integrated graphics forward, the chipmaker is still hard at work on its own discrete GPU. It reaffirmed that the GPU, dubbed Xe (formerly Arctic Sound), will begin shipping in 2020.