Intel is finally moving away from its Skylake architecture. First introduced in 2015 with its 6th-generation processors, Skylake has since formed the basis for successive generations of chips, including Kaby Lake, Coffee Lake, and Whiskey Lake.

Part of the reason for that is the difficulty Intel has had in rolling out its 10nm Cannon Lake processors on schedule. The original plan was to follow the 14nm Skylake with the 10nm Cannon Lake, but given how 10nm has slipped till late 2019, Intel has had to stick to the 14nm manufacturing process for way longer than it intended. Ultimately, we were left with very modest, incremental upgrades. Kaby Lake added higher clock speeds and better hardware acceleration of modern video codecs and Coffee Lake packed in more cores, but we didn't see any vast improvements in terms of instructions per cycle (IPC).

Now, Intel is ready to look past Skylake. At its Architecture Day in the US, the chipmaker announced Sunny Cove, its next-generation CPU microarchitecture built to boost performance per clock and power efficiency for general computing tasks.

It's still derived from Skylake, but in the words of Ronak Singhal, director of Intel's Architecture Cores Group, Sunny Cove will be "deeper, wider, and smarter". For starters, this means it can execute more instructions in parallel and with lower latencies, thanks to larger cache sizes. The chips will also feature a 5-wide design, compared to the 4-wide design used by Skylake, so they'll be able to carry out more operations in parallel. 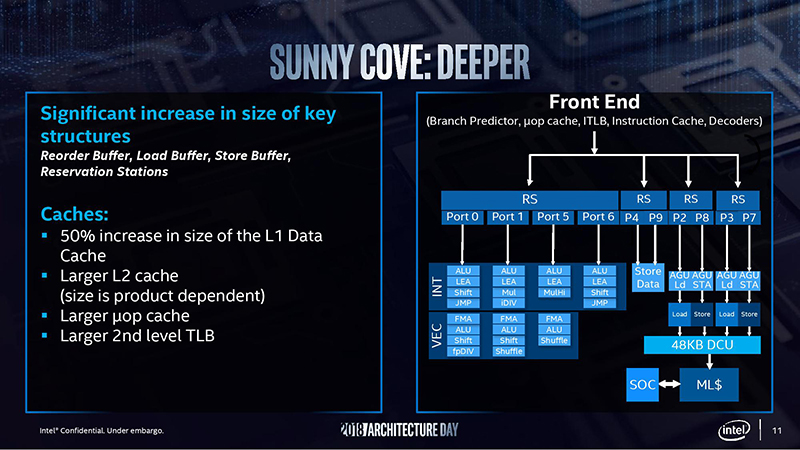 Another change is that Sunny Cove will have two more units for handling LEA instructions – an x86 instruction that can perform a range of arithmetic operations, including calculating memory addresses –and vector shuffles. This should mean more options when handling out-of-order instructions, which can give even greater parallelism. Finally, with the addition of new, specialized instructions for accelerating encryption and data compression workloads, Sunny Cove will supposedly see better performance in specialized tasks like cryptography and machine learning. There's support for AVX-512 instructions as well, which are involved in everything from general vector arithmetic to neural networks.

According to Intel, these new instructions give it as much as a 75 per cent advantage over equivalent Intel CPUs today, as demonstrated in a 7-Zip encode using AES-256. However, this demo used a version of 7-Zip that had been recompiled to take specific advantage of Sunny Cove's instructions, so the real-world performance differential may not be as large.

On top of that, Sunny Cove will now support a lot more memory, even though you're not likely to take advantage of this any time soon. The address space has been increased from 48 bits to 57 bits, which means an increase from a supported 256TB of physical memory to a whopping 4PB. To cap it all off, Xeon chips will benefit from Sunny Cove as well. After Cascade Lake and Cooper Lake, we'll see a Sunny Cove Xeon called Ice Lake.