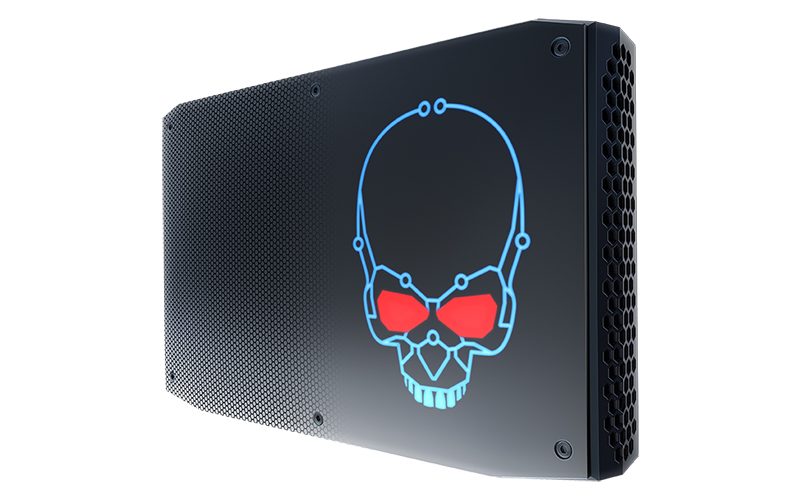 This is Intel’s most powerful NUC to date, and is also the smallest VR-capable system from the company. It’s targeted at both gamers and content creators, and will be available in two versions, the NUC8i7HVK and NUC8i7HNK.

The NUC8i7HVK is the more powerful of the two, boasting an unlocked 8th-generation Core i7-8809G (3.1GHz, 8MB cache) processor and Radeon RX Vega GH graphics to allow enthusiasts to squeeze more out of the system. This is currently the top G-series chip, and it supports HBM2 overclocking as well.

That aside, both models are very similar, and they share the same compact 1.2L chassis that measures just 221 x 142 x 39mm across. And as on previous NUCs, the lid is replaceable.

You’ll find plenty of connectivity options as well, the better to appeal to those looking for a svelte, high-performance workstation.

It comes with two Thunderbolt 3 ports and one USB 3.1 (Gen 2) Type-C port that supports DisplayPort 1.2, in addition to two DisplayPort 1.3 connectors and two HDMI 2.0a outputs. This translates to support for up to six independent monitors, so you’re fully equipped to get a sprawling, multi-monitor setup going.

One of the HDMI ports is also on the front of the unit, so it’s easier to plug in a VR headset if you wish.

The yellow USB port on the front also doubles as a charging port for your devices.

Finally, you’ll find dual Intel Gigabit Ethernet ports on the back, which is pretty impressive for a machine that’s this small.

Intel will sell the NUCs as barebones kits targeted at those who want to put together their own systems, with availability slated for sometime in the second quarter of the year. There’s support for a wide range of hardware, including 32GB of dual-channel DDR4 SO-DIMMs and two M.2 PCIe SSDs.

Note: This article was first published on 8th Jan 2018.