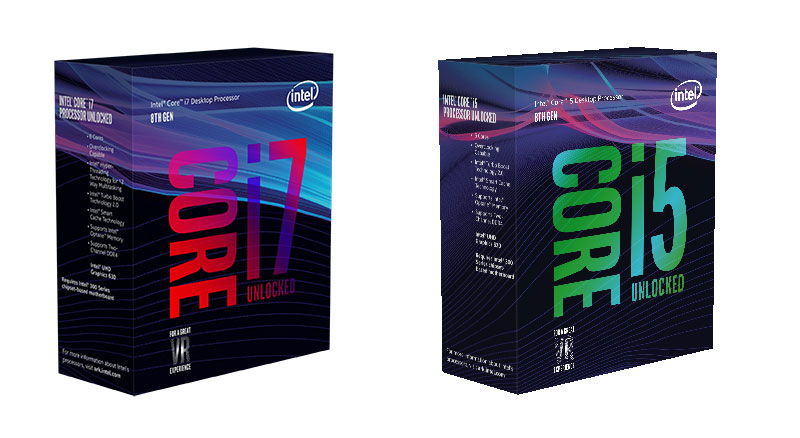 The Coffee Lake processors don’t launch until 5 October, but due to major leaks – including official presentation slides – Intel decided to properly make the information public ahead of time.

A total of six processors are being announced today, ranging from Core i3 models all the way up to the high-end Core i7 line. This is the second phase of the 8th-generation processor rollout, coming on the heels of the recently announced 15W U-series mobile chips. According to Intel, the third and final phase will comprise commercial platform parts and the remainder of the consumer processors, the latter of which will presumably include higher-end gaming laptop CPUs.

But while the previously announced mobile processors were technically still on the Kaby Lake architecture, these 14nm++ desktop chips properly use the new Coffee Lake architecture. Intel says the Core i7-8700K is the best gaming CPU it has ever made, and it's claiming a 25 per cent increase in FPS over the Core i7-7700K in Gears of War 4.

Here’s a table with the key specifications for each CPU (as usual, K-series SKUs are fully unlocked and can be overclocked):

It's immediately apparent that Intel has done something new this time, with all the chips featuring more cores than we're used to across the entire line-up. The Core i7-8700K features 6 cores and 12 threads, a first for an Intel processor at this price point. There's an unlocked Core i3 SKU this time around as well in the Core i3-8350K, which features four physical cores, a step up from the 2-core/4-thread design of its predecessor, the Core i3-7350K.

The Coffee Lake chips will still use Intel's LGA 1151 socket, but they will not be compatible with Intel Z270 boards. Similarly, Kaby Lake processors will not work on the new Z370 motherboards, in large part due to certain under the hood tweaks that had to be made to the Z370 boards in order to accommodate the higher core counts of Coffee Lake.

For instance, Intel cited an improved power delivery design on its new boards, certain changes to CPU package power delivery, as well as tighter memory routing for the higher-speed DDR4-2666 memory. All this means that Z270 board owners looking to upgrade to the new generation of processors will have to buy a motherboard as well, as per earlier rumors. The lack of compatibility with the older platform may come across as a bit of a snub to loyal Intel customers and make AMD's Ryzen chips seem more attractive, but it is ultimately a consequence of catering to the more powerful processors. 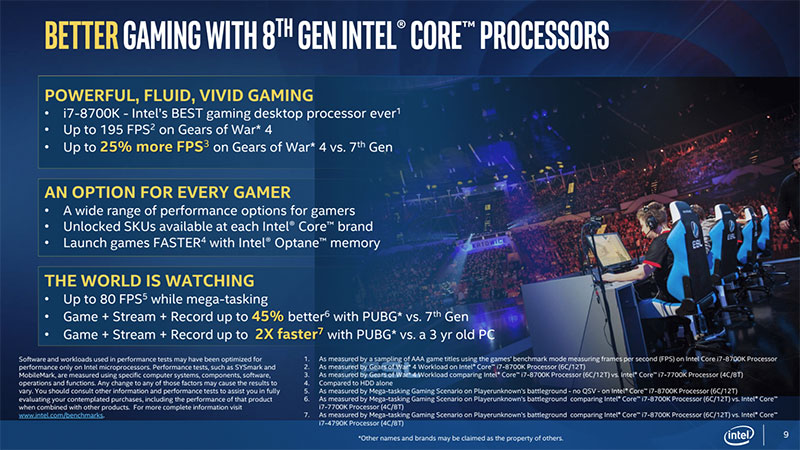 As it turns out, this may just be Intel's response to AMD's Ryzen processors, which had touted their high core and thread count as a key advantage over Intel. With presumably more robust multi-threaded performance, Intel says it is now going after both gamers and content creators at a more affordable price bracket than before, and it says it has managed to put in more cores throughout the product stack while still improving single-threaded performance and sticking to the same power envelope.

That said, the base clocks are noticeably lower than the previous generation due to the higher number of cores, so the company is likely relying on the higher Turbo Boost 2.0 speeds to make up for that. In addition, the 8th-generation desktop chips will support per-core overclocking for those who want the best possible performance in single-threaded workloads, and a higher maximum memory ratio for better memory performance while overclocking.

Overclockers may have quite a bit to look forward to, as Intel claims the new chips overclock better than even Kaby Lake. Other overclocking-oriented features include real-time memory latency controls without needing to reboot, and more extensive PLL controls that apply to system agent elements (or uncore) and additional aspects of the CPU itself. 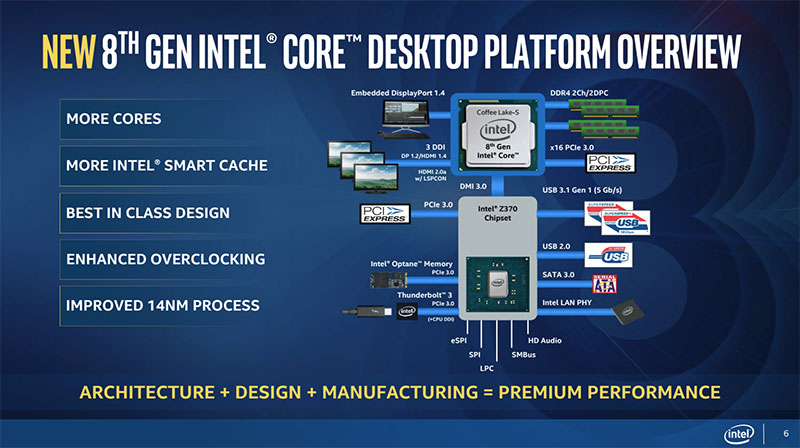 The six-core Core i7 Coffee Lake chips inevitably raise the question of where some of the lower-end Core X processors stand. Unfortunately, the quad-core Kaby Lake-X chips now appear more redundant than ever, and it's difficult to fathom who they're supposed to be for now. There's also the 6-core/12-thread Core i7-7800X, which Intel says is for users who require more I/O expansion options thanks to the 28 PCIe lanes from the CPU, even though the Core i7-8700K offers faster single-core performance.

Ultimately, the new Coffee Lake processors look like they could offer a nice value-add over the usual dual- and quad-core processors we're used to seeing. We'll be getting our hands on the Core i7-8700K and Core i5-8400 soon, so stay tuned for a full review.