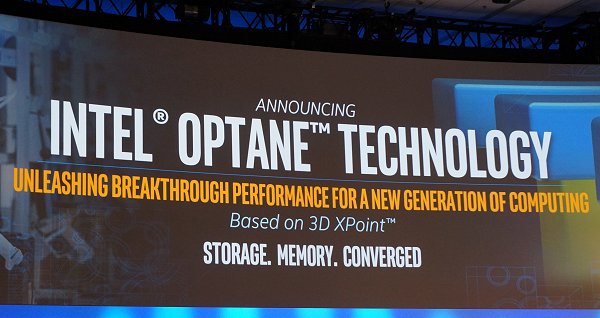 Capitalizing on the Intel’s recent launch of a brand new memory type in several decades called 3D XPoint, the company managed to put together a working demo of 3D XPoint memory in action. Since it’s a brand new memory type, it will require a specialized memory controller, interfacing hardware and software stack to interface with the memory and take advantage of its unique properties and vast performance potential.

At Intel IDF 2015, Intel announced its Optane technology that will encompass all of the above aspects, based on 3D XPoint memory. Since 3D XPoint combines the best properties of DRAM and NAND technology, you get fast, inexpensive non-volatile, transistor-less design that’s suitable for both system memory and storage products. 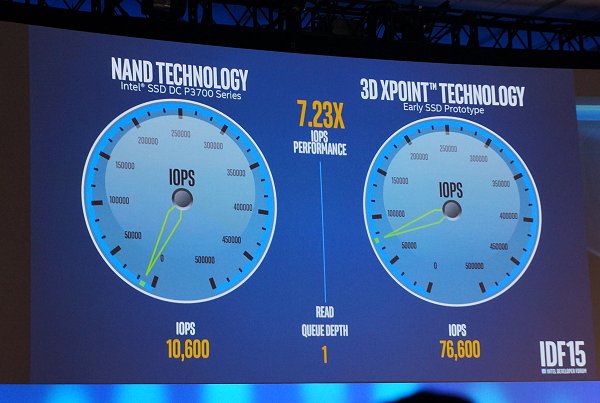 The result? Intel Optane technology registered over seven times the IOPS performance advantage over the current NAND powered solution from Intel. If you notice the image above, the results are just based off a read queue depth of 1 and that’s hardly a taxing test. Should we throw deeper queue depths of various test data sizes and write based testing, that will really reveal the true performance potential of Intel Optane technology. Alas, no other details were shared to strip down the publicly shown test results.

At this point of time, Intel says that Optane technology will first come to market in a new line of high-endurance, high-performance Intel SSDs beginning in 2016. These drives can be used in either data center like applications, or even in client machines. It will be eventually be made in multiple form factors like M.2, U.2 and add-in PCIe cards.

The new class of memory technology will also power a new line of Intel DDR4 DIMMs designed for Intel’s next-generation data center platforms (hint: it will be a future Xeon processor).

More details of Optane technology will trickle down in the future as we get closer to the actual availability. For now, you can find out more details on how 3D XPoint memory works over here.

Join HWZ's Telegram channel here and catch all the latest tech news!
Our articles may contain affiliate links. If you buy through these links, we may earn a small commission.
Previous Story
Sony unveils SmartBand 2 with heart rate sensor and IP68 waterproofing
Next Story
USB 3.0 ports to deliver near-Gigabit speeds with Cypress EZ-USB GX3 controller