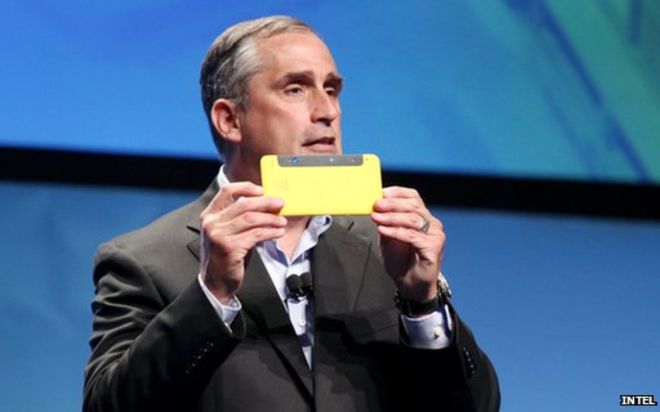 Intel’s announcement of its extended Atom x3 processor roadmap and the inclusion of its processors in over 45 mobile devices wasn’t the only news to come out of IDF 2015 in Shenzhen; the chipmaker also took the opportunity to show off a new iteration of its RealSense 3D camera. The new camera is a smaller, slimmer version of its old self and features improvements such as longer detection range and lower thermal output. And here’s the good part – it can now fit into a 6-inch smartphone.

We already saw the RealSense 3D camera on the 6mm-thin Dell Venue 8 7000 tablet, and you can check out our hands-on experience with the device here. As seen on the Dell tablet, the RealSense 3D technology can sense depth information to accurately measure dimensions and distances; it can even interpret and respond to movements in 3D space and holds great potential for face recognition and biometric security.

Intel CEO Brian Krzanich described Intel’s RealSense camera as capable of using its vision-based capabilities to deliver new  and innovative usages and capabilities across a variety of form factors. In fact, Intel’s RealSense 3D camera has already found its way onto desktops, laptops and tablets, including the new Dell Venue 10 7000, the larger sibling of the 8.4-inch Venue 8 7000. It’s nice to see that the RealSense 3D technology has finally made its way onto the most ubiquitous mobile device today – even if it is just a prototype.

There's just one caveat: Krzanich apparently didn't turn on the device on stage to demonstrate it, which could mean that it's still early days for this newer and slimmer RealSense 3D camera as the Intel CEO is known for taking risks with live demos on stage.

Join HWZ's Telegram channel here and catch all the latest tech news!
Our articles may contain affiliate links. If you buy through these links, we may earn a small commission.
Previous Story
69 brands and products honored at HWM+HardwareZone.com Tech Awards 2015
Next Story
Control up to 5 coolings fans with your fingertips using Thermaltake’s Commander FT