Intel today introduced the fourth iteration of their Intel Core processor family with the availability of the latest 4th generation Intel Core processors (formerly codenamed Haswell). Packing up to 1.4 billion transistors in a quad-core chip fabricated using the latest 22nm process technology, the monolithic 177mm2 chip promises to deliver up to 1 teraFLOP of compute capacity with 300 gigaFLOPs delivered from the CPU and 700 gigaFLOPs from the GPU. 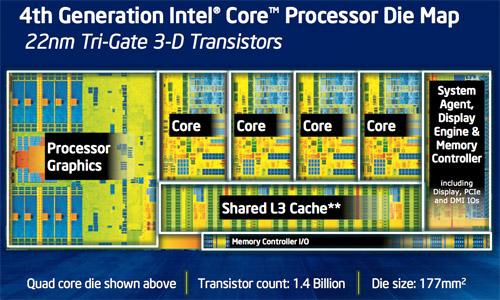 To enable greater integration into mobile 2-in-1 laptop/tablet designs, the new 4th generation Intel Core is also the first to deliver a single SoC (System-on-Chip) solution that will give OEMs the flexibility to design even smaller, sleeker and lighter form factors. By eliminating the traditional 2-chip platform, the single BGA package which combines both CPU and PCH helps free up precious real estate space within the device, simplifying thermal designs as well as board complexity for highly integrated devices like Ultrabooks and convertibles. This single chip processor will be available as the U-series with thermal design power as low as 15W. 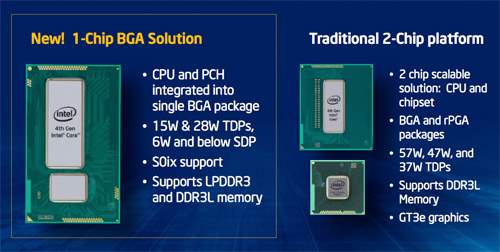 In the area of graphics, Intel has also greatly improved its integrated GPU to deliver up to two times more performance and supporting the latest DX11.1 and OpenCL 1.2 APIs as well as OpenGL 4.0. You can expect to see fluid high resolution 3D renders with the new processors, supporting an even wider range of games with the integrated graphics. Depending on the kind of graphics processor integrated, the 4th generation Core should be able to replace most low- to mid-range discrete graphics solution. This would render most low-end discrete solutions obsolete while bringing the price point of laptops down to a more affordable level and at the same time, delivering better graphics performance. Expect also to get support for 4K video decodes and display on up to three screens. For even greater graphics performance, Intel also introduced a unique set of higher performance processor SKUs with embedded DRAM (eDRAM) that promises to deliver performances that matches discrete components. These processors will come with the Intel Iris and Iris Pro branding to differentiate them from the other SKUs that doesn't come with eDRAM. 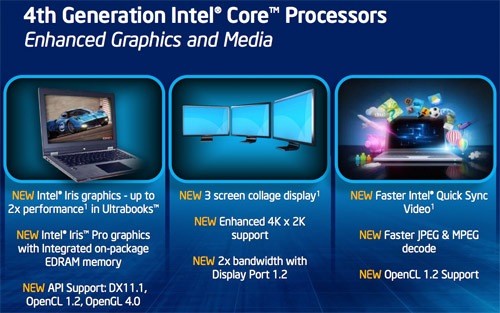 On the desktop side, one should expect significant changes in motherboards as the new 4th generation Intel Core processors will be introduced using a new LGA-1150 package (or otherwise known as Socket H3). This means that the new Intel 4th generation processors will not be a drop-in replacement in any of your current crop of Intel 7 series motherboards as they are not mechanically compatible (previous generation uses LGA-1155 socket). Along with the new socket, Intel will introduce a new set of 8 series chipsets while offering a couple of new feature enhancements. The good news is, it will now come with more USB 3.0 ports (6 in total) and a total of six SATA 6Gb/s ports (up from 2). In addition, the new 8 series will no longer support any legacy PCI slots although some motherboard manufacturers may still include support for them through a PCI bridge. 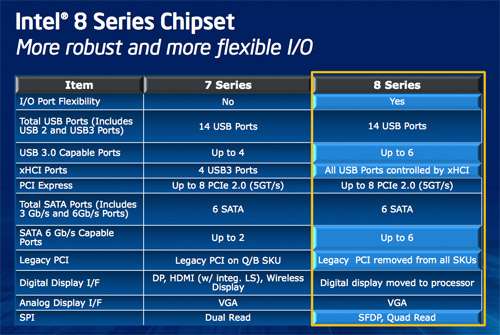 Starting today, you will be able to find products featuring the new 4th generation Intel Core processors, beginning with desktop variants and new Intel 8 series motherboards to standard laptops and new 2-in-1 convertible Ultrabooks. Desktop processors will populate the high-end Core i7 series as well as mainstream Core i5. Unfortunately, there won't be any Core i3 variants at launch. There will also be the usual unlocked K versions for the enthusiasts who want to overclock their systems. Prices for these processors seem affordable though, with the Core i7-4770K (3.5GHz) unlocked version at only US$339 for 1Ku while the i5-4670K (3.4GHz) unlocked version going for US$242 for 1Ku.

Finally, Computex will never be complete without star power. This year, Intel invited Jolin Tsai to appear at their keynote to talk about the new wave of 2-in-1 devices that will be enabled by Intel's 4th generation Core processors.