When Intel sets its focus on delivering chips for mobile devices several years ago, most tech pundits were pessimistic at Intel's chances in capturing the mobile/tablet market as ARM processors already had a firm grip in the mobile ecosystem. With two of the major mobile operating systems running on ARM architecture, it's not difficult to stay skeptical at Intel's future in mobile.

Although there was much excitement when Intel successfully demonstrated its ability to deliver an SoC (system-on-chip codenamed Medfield) for mobile phones early last year, much of it fizzled out due to limited device offerings. However, what caught our attention was the positive implementation of Android apps running on Intel's x86 microarchitecture. Executing an x86 version of Android smoothly on the Atom was not only an eye opener, but it showed everyone the performance it could deliver on just a single core processor. The last iteration we've tested was the low-power Atom processor (whose platform is codenamed Lexington) which was found on the Acer Liquid C1 smartphone.

Several iterations later and more software optimizations after, Intel is now a lot closer to go head-on with big wigs like Qualcomm and NVIDIA. 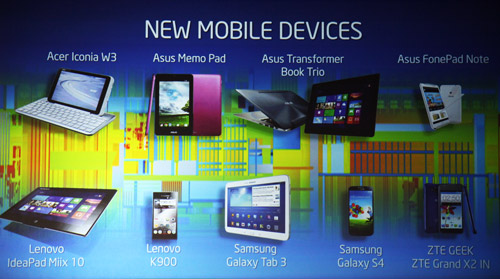 So with today's announcement of the latest "Bay Trail-T" SoC for tablets, it wasn't surprising to see that most were excited once again. Due to hit the market in time for the holidays this year, the next generation 22nm Intel Atom processor for tablets and ultra-mobile devices will be found in more sleek product designs while providing more than 8 hours of continuous usage and weeks of standby. Expect also to see such products supporting Android and Windows 8.1 devices. 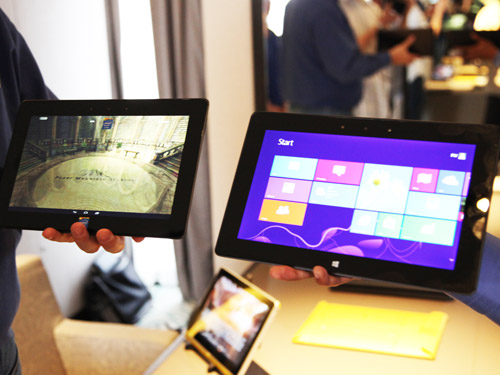 The new Intel Atom-based processor will be built with Intel's latest 22nm tri-gate transistor technology, hence you can expect nothing less than what Intel's world-class manufacturing fabs can offer. Based on the Silvermont microarchitecture, the processor features a new out-of-order execution engine that enables best-in-class, single-threaded performance. Although only single threaded, the new processor will be introduced initially with 4 cores, built using a new multi-core system fabric architecture which is scalable up to 8 cores for future variants of the processor. This architecture is expected to enable greater performance with higher bandwidth, lower latency and more efficient out-of-order support for a more balanced and responsive system. There are also new IA instructions and technologies that enhances performance, virtualization and security management capabilities to support a wide range of products. These instructions build on Intel's existing support for 64-bit and the breadth of the IA software installed base.

Apart from the new Bay Trail-T SoCs targeted exclusively for tablets, Intel will also offer its customers other variants to meet the demand for products with other form factors and usage. According to Intel, there will also be Bay Trail-M SoCs for budget notebooks and Bay Trail-D for dekstops. However, both Bay Trail-M and Bay Trail-D parts will be branded as Celeron and Pentium and will no longer carry the Atom brand name. 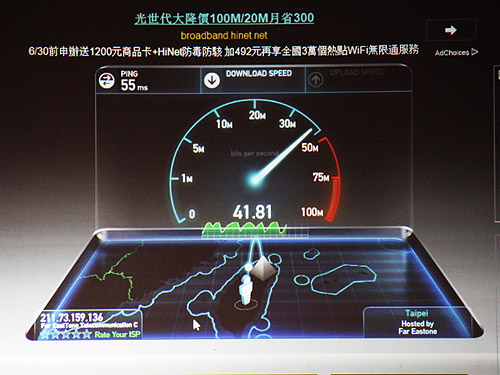 Beyond Bay Trail, Intel will continue to deliver more SoCs based on the Silvermont architecture and we should expect to see Merrifield coming up next for smartphones. According to Intel, Merrifield will take advantage of the same 22nm process technology and will deliver performance increase of 50 percent of more and will also extend battery life of devices over current generation Clover Trail+. Merrifield is expected to debut at next year's MWC in Barcelona.