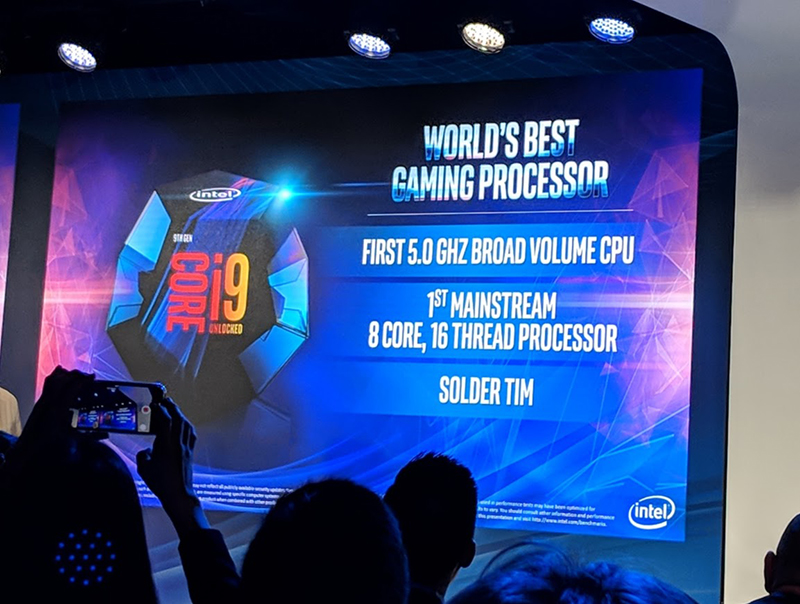 Intel today announced its 9th-generation desktop processors for mainstream consumers, including the flagship 8-core/16-thread Core i9-9900K. The latter is Intel's first ever mainstream octa-core chip, which most of us can probably agree has been a long time coming.

The Core i9-9900K will go head-to-head with AMD's Ryzen 7 2700X (3.7GHz, 16MB L3 cache), offering a higher Turbo Boost 2.0 speed of 5.0GHz. To be clear, the latter refers to the maximum single-core Turbo frequency, and not an all-core boost speed, but it's still the first mainstream chip to be able to hit 5.0GHz without overclocking.

In addition, the new 9th-generation processors will use solder TIM, no doubt a response to the outcry over Intel's previous use of a less efficient layer of thermal compound to transfer heat between the CPU die and the heat spreader. Solder TIM provides increased thermal conductivity between the CPU die and the integrated heat spreader, which improves heat dissipation and allows for more thermal headroom.

Here's an overview of the specifications of the 9th-generation chips:

If you're thinking of upgrading, the good news is that the 9th-generation chips will work with existing Intel 300-series chipsets, which will save some of you from having to run out and get a new motherboard. Intel hasn't been the best when it comes to backward compatibility, especially when compared to AMD, so this is definitely a welcome move.

Having said that, Intel is also launching a new Z390 chipset alongside its new processors, should you wish to completely overhaul your system. There's not a lot that separates Z390 from Z370 though, and the main changes include native support for USB 3.1 (Gen 2) and integrated Intel Wireless-AC with support for Gigabit Wi-Fi.

According to Intel, the new chips should offer around 10 per cent better performance in select games than the Core i7-8700K (3.7GHz, 12MB L3 cache), in addition to 34 per cent faster video editing.

The 9th-generation chips will begin shipping on 19 October, but pre-orders open today.

Join HWZ's Telegram channel here and catch all the latest tech news!
Our articles may contain affiliate links. If you buy through these links, we may earn a small commission.
Previous Story
Android 9.0 Pie may be coming to Samsung Galaxy devices in Jan 2019
Next Story
Secretlab’s new SoftWeave fabric chairs look super cool and stylish