Earlier this month, Intel debuted its 10th-Gen processors dubbed Ice Lake, which is also its first 10nm processors. Today, the company is further expanding that line-up with eight new chips. But confusingly, these additional 10th-Gen processors are built on its older 14nm process technology and are instead called Comet Lake. 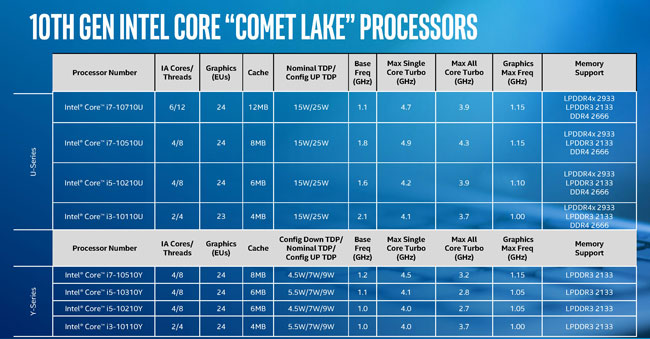 Comet Lake will come in four new U-Series processors and four new Y-Series processors as part of the 10th-Gen processors lineup. The 14nm chips will lack the benefits of the 10nm Ice Lake’s, for instance it will not be as power efficient nor provide laptops with the same kind of excellent battery life as Ice Lake’s laptops. Comet Lake chips also won’t feature Intel’s new (and impressive) Iris Plus integrated graphics, which it claims can handle gaming at a smooth 60fps at 1080p resolution.

So basically, when you buy a laptop with a 10th-Gen processor and hope to play games on it, you have to be very careful in looking out for clues that tells you which are using Ice Lake or Comet Lake processors. Pricing is one tell-tale sign, as laptops with Ice Lake chips is expected to be more costly. But the surest way lies in the processor’s name. 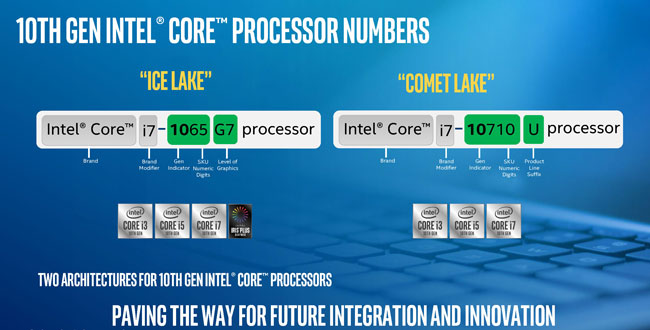 You can sort these out by looking out for the “U” or “Y” in their model names, as shown in the photo above. Intel’s Ice Lake processors are technically U- and Y-series chips too, but you won’t find it in the name. Instead, Intel differentiates Ice Lake processor with an appending “G-number” to the end, indicating that they feature its new Iris Plus graphics.

These 8 new processors mean Intel now has a total of 19 10th-Gen processors, and the branding is incredibly confusing now

Join HWZ's Telegram channel here and catch all the latest tech news!
Our articles may contain affiliate links. If you buy through these links, we may earn a small commission.
Previous Story
Here's the updated roster for Mortal Kombat 11’s Kombat Pack
Next Story
PS4 owners can try out Call of Duty: Modern Warfare for free this weekend