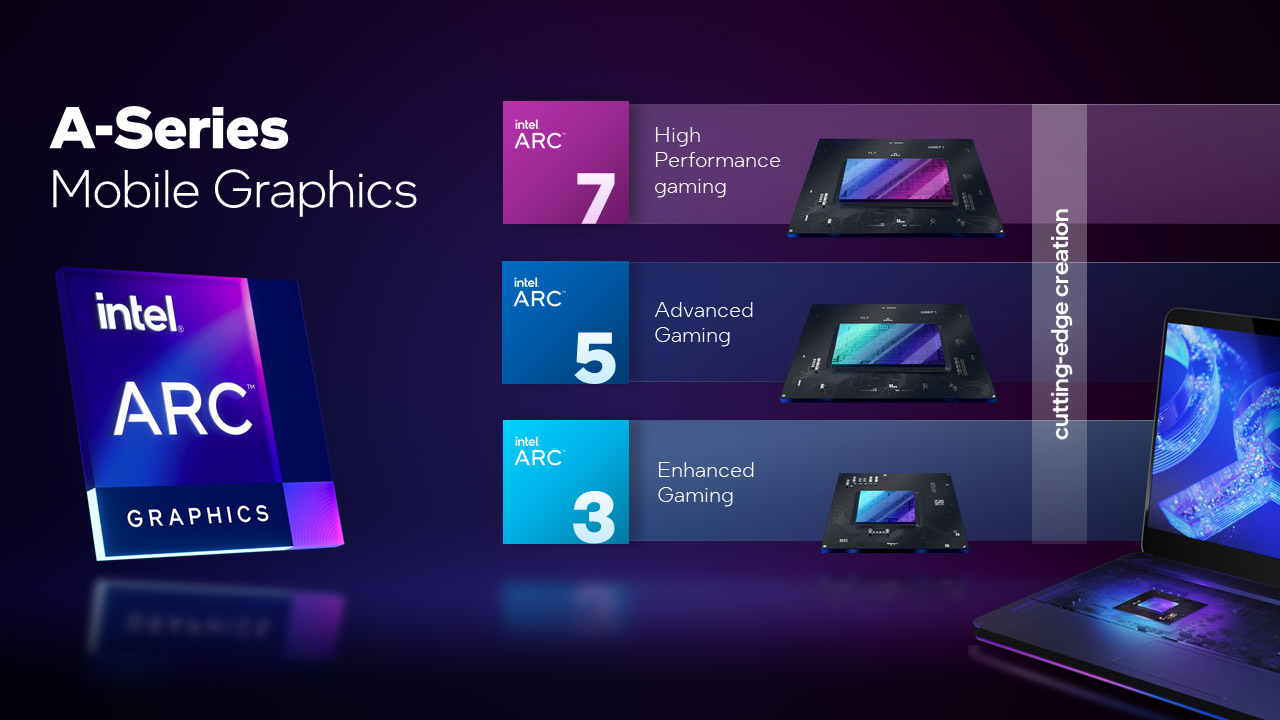 After years of watching the duopoly of Team Green and Team Red battling for dominance in the discrete GPU space, though the battle has been one-sided, Team Blue has finally joined the battlefield. NVIDIA and AMD, I introduce to you the Intel Arc.

Formerly codenamed Alchemist, Intel has teased its discrete GPU for a few years now and even though the Blue firm officially announced Arc last August, it's only now that we get to know more of it in detail – specifications, in-house benchmark numbers, and more – in its mobile form.

You read that right: Intel Arc will debut for notebooks first.

As one can expect from a modern GPU, the Intel Arc GPUs will bring with them support for DirectX 12, dedicated ray-tracing hardware, AI acceleration hardware and, more importantly, graphics horsepower through three tiers - the Arc 3 for casual gaming, Arc 5 for advanced gaming and the Arc 7 for high-performance gaming. 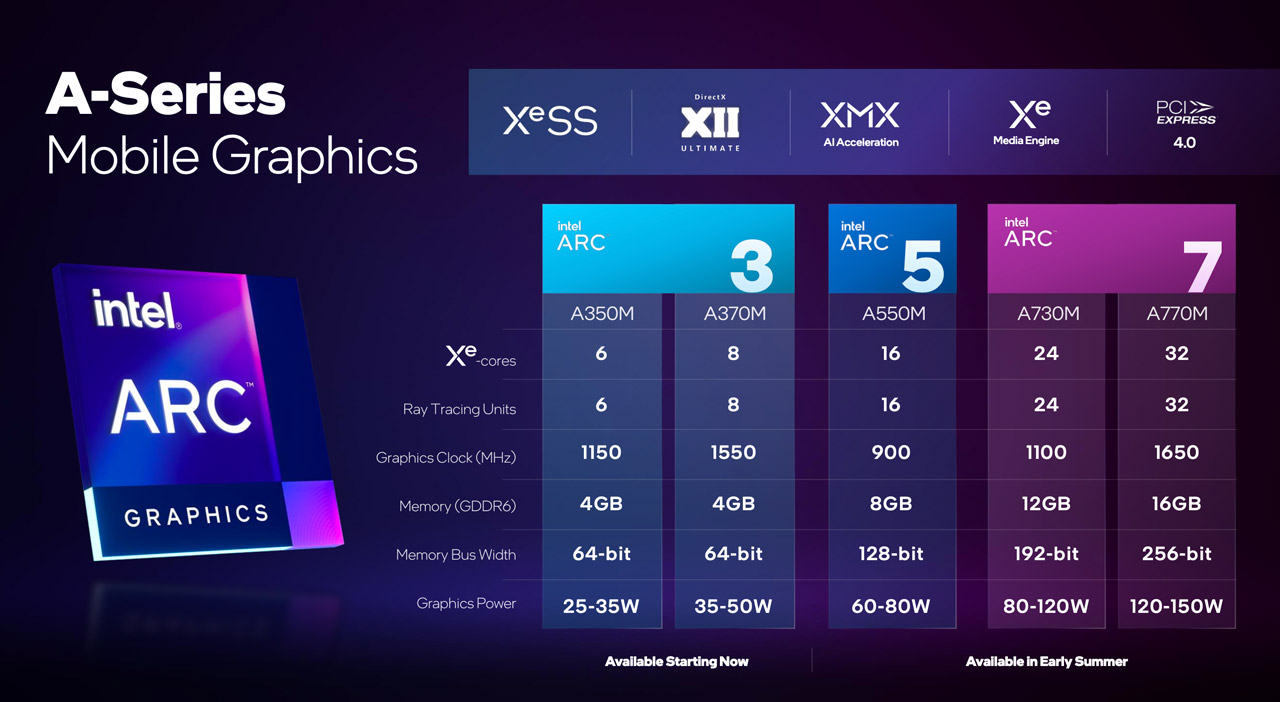 Intel seems to be taking a rather cautious step by first launching its least powerful Arc 3 series. The lowest, the A350M, has six Xe-cores and six ray-tracing units, while the one-step up A370M comes with eight Xe-cores and eight ray-tracing units. They also require between 25W to 50W for power, so are clearly targeted at the ultraportable mobile segment – not for high-end gaming but useful nonetheless for those who just want more graphical firepower without sacrificing their notebook's super-slim form factor.

For decent to high-end gaming, you will have to wait for the more powerful Arc 5 and Arc 7 GPUs, which come with more cores (the Arc 5 has double that of the Arc 3), video memory, ray-tracing units and obviously will also require more power too. The Arc 7 A770M, for instance, draws between 120-150W. To put that into perspective, NVIDIA’s GeForce RTX 3080 Laptop GPU draws between 80-150W depending on the manufacturer’s setting. Furthermore, previous rumours have pegged that the initial Intel Arc series can match a GeForce RTX 3070, and the current power envelop seems to correlate with this. Intel says these higher tier GPUs will come in early summer. 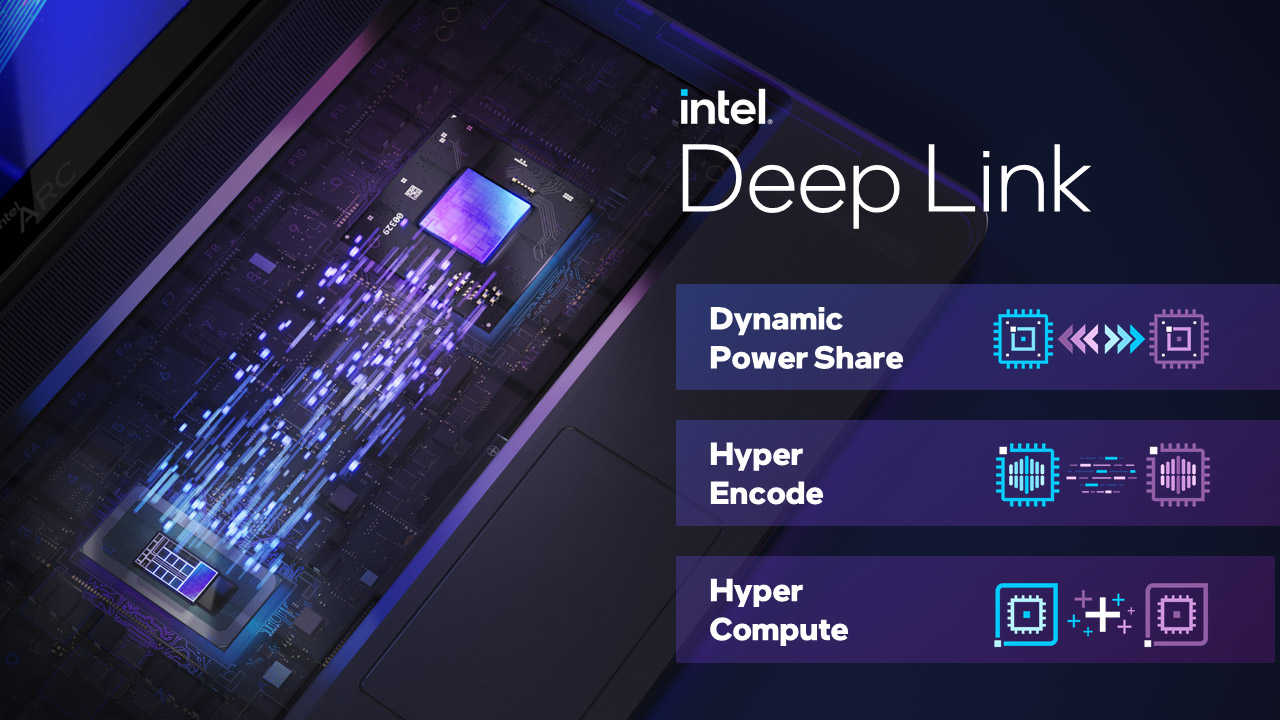 One key feature that all Intel ARC GPUs has is what Intel calls Deep Link. It leverages the complete hardware stack of Intel processors and Arc GPU to optimise power-sharing. Integrating resources between CPU and GPU (both must be Intel’s, of course) allows the system to determine which processor requires more power for a given task and allocate it on the fly. If that sounds familiar, it’s because it works in the same way as AMD’s own SmartShift or NVIDIA’s Dynamic Boost. Intel says this could give the Arc GPUs up to 30% more graphics performance through having more GPU power budget or up to 60% in creation tasks like video encoding that are optimised for the new Xe media engine and taking advantage of Deep Link.

The Arc GPUs will also come with full AV1 hardware acceleration, a first for the industry, to enable faster video encoding in a variety of apps, such as XSplit. 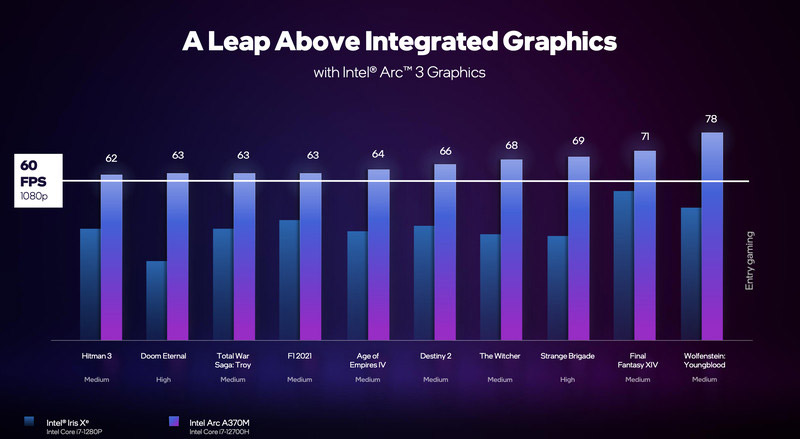 NVIDIA’s super-sampling tech, Deep Learning Super Sampling (DLSS), is the gold standard when it comes to upscaling games to a higher resolution on the fly. Naturally, Intel has also been developing its own super-sampling tech for the Arc GPUs, called the XE Super Sampling (XeSS) which utilises the Intel XMX AI acceleration engine. Intel has said that this won’t be available at launch, though. Instead, it’s likely to launch around the same time as the Arc 7, which makes sense since XeSS is better utilised with GPUs with more graphics power to spare than entry-level GPUs. Other forms of AI acceleration to turbocharge content creation workflows will also be made available later through a software update since that too will utilize the Intel XMX engine.

Along with the hardware, Intel also revealed Intel Arc Control, a control suite like NVIDIA’s GeForce Experience and AMD’s Radeon Software. Arc users will be able to get driver updates, tweak and monitor performance. It will also have in-game overlays, so you can keep an eye on your graphics performance while playing games. 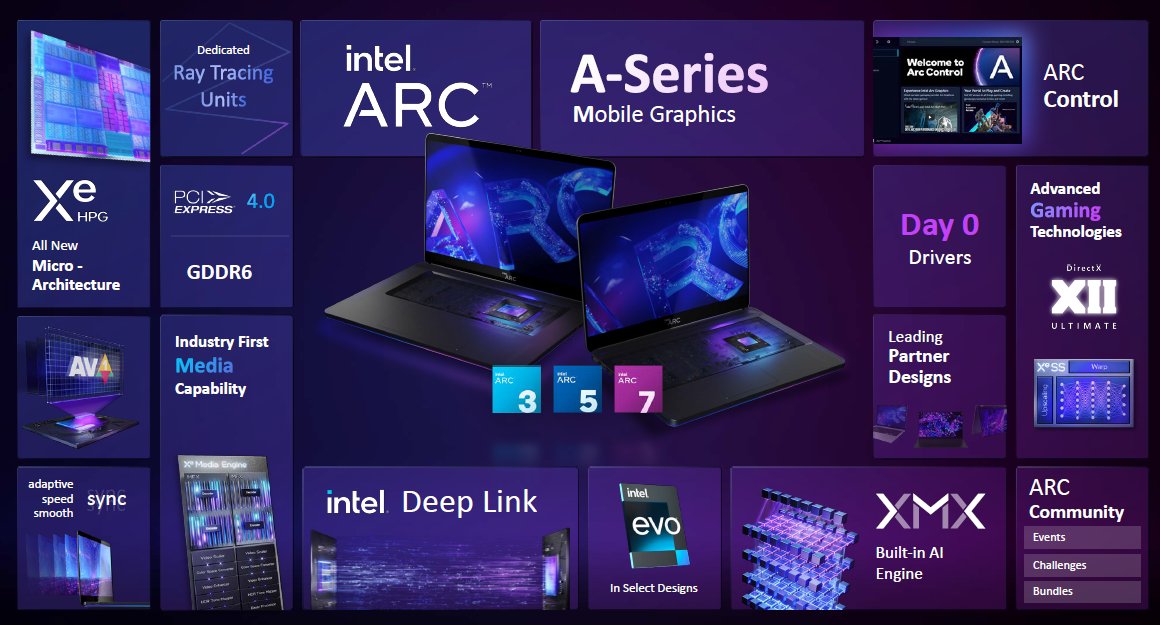 In the meantime, desktop gamers will have to wait a little longer for the desktop versions of the Arc GPUs, which Intel has said will arrive in Q2 2022.

The graphics arena will soon get very interesting as Intel has shared a long line of graphics hardware codenames for its future generation of gaming GPUs, which only further signifies Intel's resolve to get back into the graphics hardware scene in a big way. Here's Intel's 60-second overview of Intel's Arc graphics:-

Join HWZ's Telegram channel here and catch all the latest tech news!
Our articles may contain affiliate links. If you buy through these links, we may earn a small commission.
Previous Story
Android 13 could have a feature that allows two telco numbers on one eSIM
Next Story
LG said to be working with Apple on foldable OLED displays for iPad and MacBook