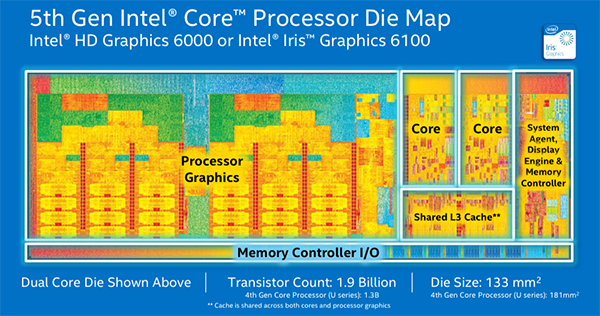 We have been waiting for quite a bit, but it is finally here. Intel’s has just announced the release of its latest processors based on its new 5th generation “Broadwell” architecture. The new processors will benefit from performance and efficiency enhancements thanks to a smaller 14mm manufacturing processing. 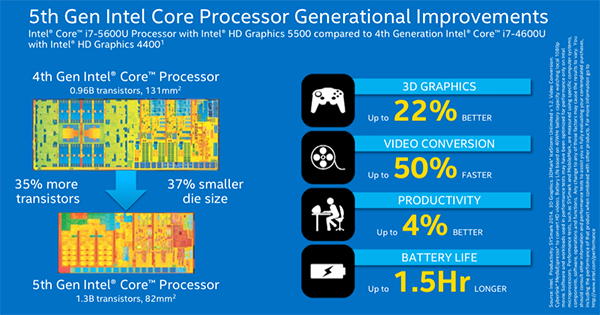 According to Intel, its new Core i7-5600U processor with intel HD Graphics 5500 packs 35% more transistors and yet comes in a 37% smaller die size when compared to the older Core i7-4600U. Additionally, Intel also claims graphics performance improvements of up to 22% and yet battery life can be as much as 1.5 hours longer.

Graphics will once again be an important point for the new processors. As we can see from the die shot in the first picture above, roughly 60% of the die is dedicated to the GPU. The new Intel HD Graphics 5500 and 6000 and Intel Iris Graphics 6100 will be both DirectX 11.2 and DirectX 12 ready and will also have better support for 4K resolution.  Graphics aside, the new processors will also have improved Intel Smart Sound technology and will have support for Waves and DTS post-processing, thereby further reducing CPU utilization when watching videos.

Performance and power efficiency improvements aside, the new 5th generation Core processors will also have better support for Intel’s RealSense technology, which aims to make interacting with your PCs more natural and fun. Voice Assistant, for instance, will enable users to command their systems to search the web, play movies or music, control basic PC functions and more.

Additionally, the new processors will also be the first to support Intel WiDi 5.1, which will support display resolutions of up to 4K. Intel has also announced a new WiDi adapter from Actiontec that takes on an HDMI stick form factor and will retail for US$39.99.

Finally, Intel said that users can expect to see new devices featuring these processors beginning from this month and we will definitely be keeping a look out for them as we trawl the halls of CES.

Join HWZ's Telegram channel here and catch all the latest tech news!
Our articles may contain affiliate links. If you buy through these links, we may earn a small commission.
Previous Story
Internal sketch of Apple iPad Pro leaked, said to have four integrated speakers
Next Story
The Withings Activité Pop activity-tracking watch costs US$150, but it looks good