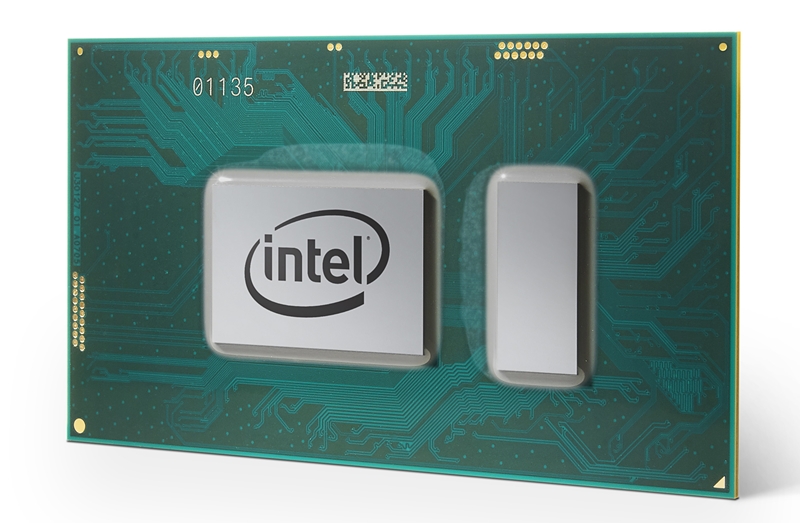 Despite the initial leaks of Intel’s plan to launch its 8th-gen Core “Coffee Lake” CPUs, the chip maker has been characteristically stoic about its roadmap plan to the public.

Today, on 21st August, the company has officially launched its 8th generation Intel Core mobile processors. Taking a leaf from its rollout strategy for previous generation Kaby Lake CPUs, the chip maker has fired the first salvo with mobile CPUs with a Kaby Lake Refresh architecture, parked under the U-series. The other series are Y-, H-, and highly-anticipated S-series that is targeted at desktop, AIOs, and small form factor PCs. 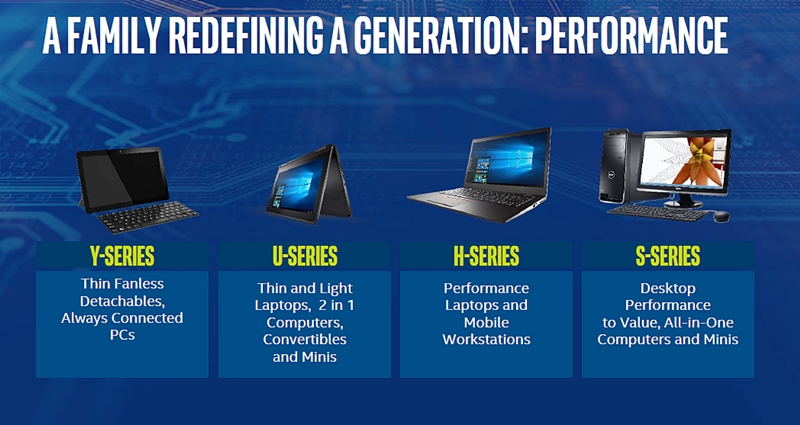 There aren’t any Intel Core i3 mobile processors for the current line-up, and they are most likely meant for Y-series products, which will be made up of thin, passively-cooled detachable laptops and always-on computing devices. The U-series mobile processors will make their appearances in "thin and light laptop, 2-in-1 computers, convertibles and mini-PCs" segment. Accoring to Intel, the 8th-gen Intel Core U-series mobile CPUs have sufficient compute prowess to support "mainstream VR" with its Intel UHD 620 graphics engine. Intel hasn't yet defined what they term "mainstream VR", but we'll get more details in the coming days ahead. 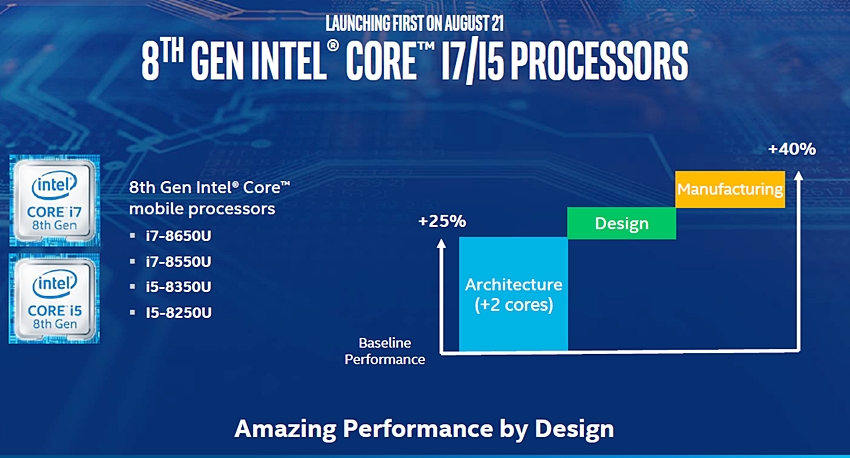 If you notice the processor configuration, it's interesting to note that the new Y-series in the Core i5 and Core i7 class processors now sport quad cores and HyperThreading to process a total of eight threads simultaneously. Previously, you had to opt for higher tier processors in the H-series for such powerful processing capability. Combined with the additional CPU cores and HyperThreading capability, the new processors also boast higher rated operating frequencies. According to Intel, they also made some tweaks to the ring bus technology, as well as some design and manufacturing enhancements to give the new CPUs a performance boost. All of this come together to boast a performance gain of up to 40%, vis-à-vis the previous generation Kaby Lake CPUs. Despite the performance increment, the 8th-gen Intel Core mobile CPUs boast of the same 15W TDP as the latter.

With such vaulted performance claims, Intel wants to target both creators and consumers of VR and 4K content, even though there aren’t new media engines incorporated in the new Intel Core mobile CPUs.

Another advantage of the new chips is power efficiency, which Intel claims, achieved at both microarchitecture and system levels, resulting in longer hours of operations, especially in the consumption of 4K content for entertainment purposes. As mentioned earlier, the new chips work with mainstream VR, which is defined as support for Windows Mixed Reality. 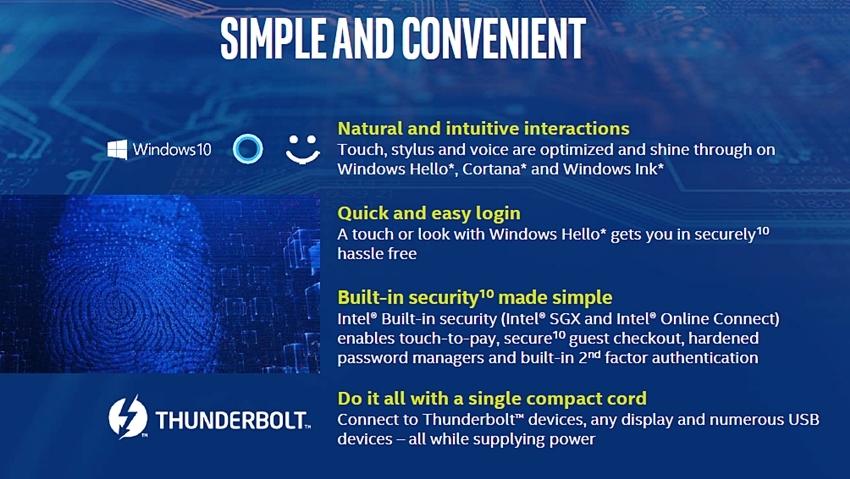 The company was also quick to reiterate the new processors’ built-in security features with support for Intel SGX and Intel Online Connect for “touch-to-pay, secure guest checkout, hardened password managers and built-in 2nd factor authentication.” Not forgetting the presence of Thunderbolt 3 technology, and we are very sure that one of its primary usage will be used to give new U-series based devices a graphics compute boost with an external graphics card dock. 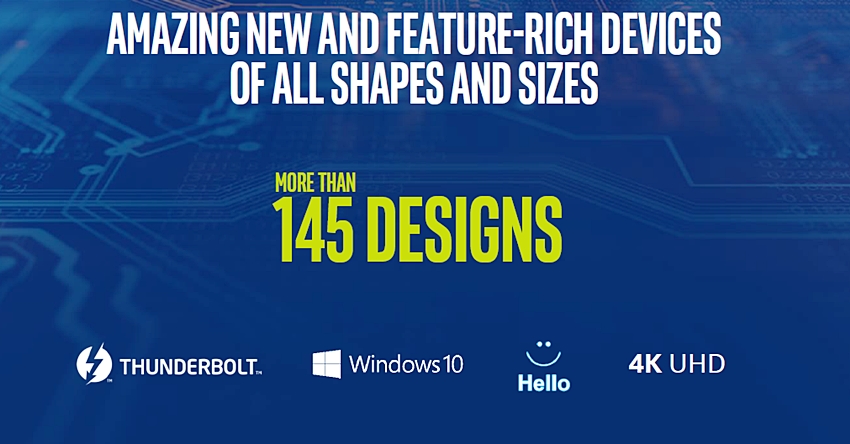 New computing devices, based on the new chips, are expected to be available to consumers in September this year. Intel claims their OEM partners have up to 145 new designs for the new computing devices. The desktop CPUs of the S-series will launch by fall this year, and they will also include “additional products for enterprise, workstation, and enthusiasts’ notebooks and desktops.” 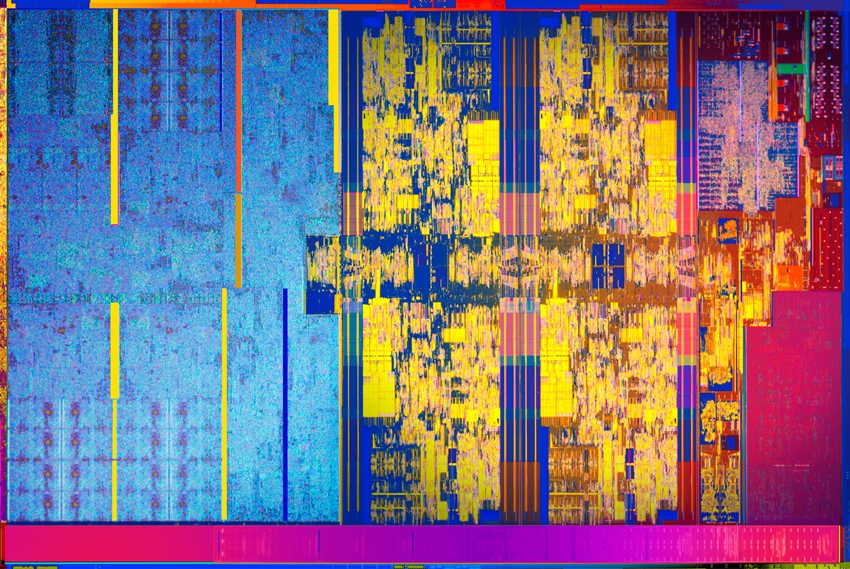 Besides beefing up the number of processing cores available, higher operating frequencies, and optimization to its existing ring bus architecture, the new 8th generation U-series Intel Core mobile CPUs are essentially based on the refinement of the 14nm process technology of the Intel “Skylake” microarchitecture, just like its "Kaby Lake" predecessors. Therefore, current owners of Intel Core “Skylake” and “Kaby Lake” mobile computing devices would be hard-pressed to take the 8th-gen upgrade path.

This is apparent as Intel has targeted the market segment of PC users who are still using the third-generation Intel Core “Ivy Bridge” CPUs. Intel claims that this market segment has over 450 million PCs and laptops that are sorely in need of hardware upgrades.

But this is just the beginning as Intel promises that the 8th generation Intel Core CPU family will include "Coffee Lake" desktop processors as the company will roll out its S-series desktop CPUs and its first 10nm products through Cannon Lake, followed by enterprise-level processors that are targeted at enterprise customers as well as enthusiasts consumers. We will be waiting with bated breath for this long-awaited “tock” in Intel’s chip development model. One thing is clear however, the processor family generation will no longer consist of a single manufacturing process node technology or microacrchitecture name - just like today's Kaby Lake Refresh microarchitecture U-series processors that's featured in the 8th Gen Core family.

Join HWZ's Telegram channel here and catch all the latest tech news!
Our articles may contain affiliate links. If you buy through these links, we may earn a small commission.
Previous Story
ASUS unveils four ZenFone 4 smartphones
Next Story
Movie production houses are trying to make videos available for streaming sooner