In its ongoing quest to “re-invent” the notebook, Intel has focused on its strength of building better processors that save power and emit less heat, all without compromising on its compute capabilities. With its shift onto the 14nm fabrication process, the chip maker will introduce its highly anticipated Broadwell processors, with the Intel Core M series leading the charge. 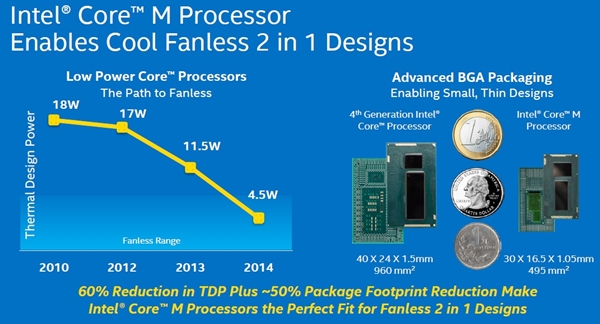 One of the major advancements of the Intel Core M processor is thermal power envelope of 4.5W, allowing it to be cooled with a fan-less system. At the same time, its die size has been shrunk to 495mm squared. In comparison to previous generation Intel Core SoC (systems on chip) that has a die size of 960mm squared, the new Broadwell mobile chip’s footprint has been reduced by almost 50%! 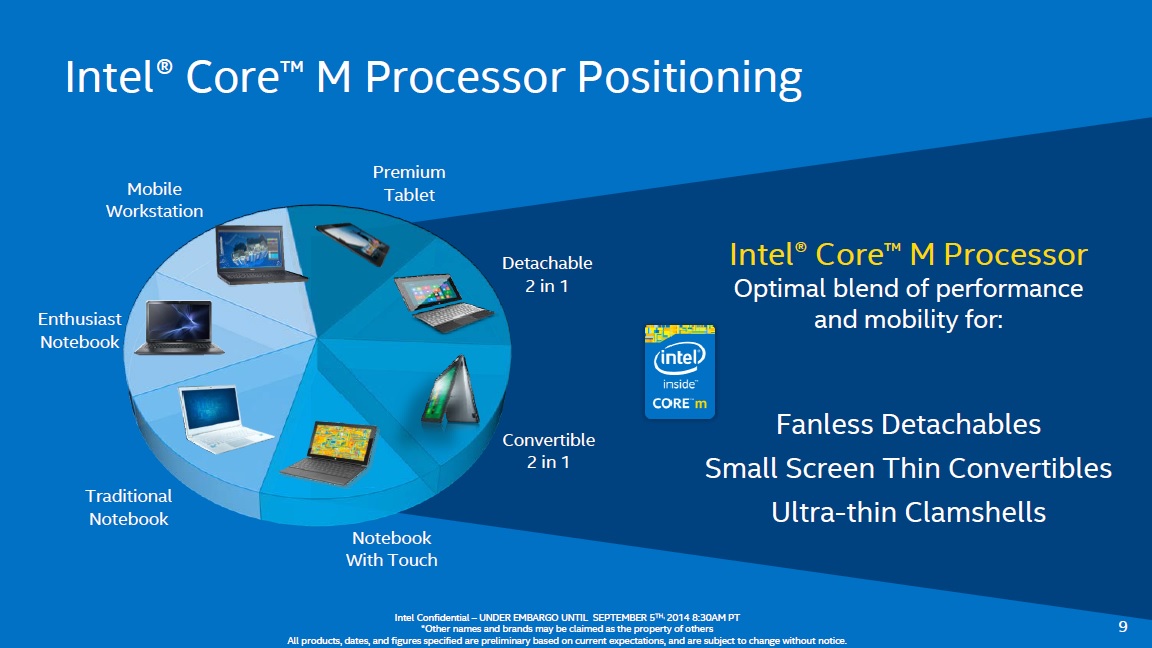 Intel intends to target the high-end tablet market segment; as noted by research firm Gartner that consumers from developing markets have chosen the tablet over the PC. Intel’s strategic move seems to be in line with this development. By empowering 2-in-1 convertibles with the new Intel Core M processors, consumers, who are looking to replace their aging desktop PCs, will consider such devices as it offers them the full desktop OS computing experience, as well as the mobility computing capabilities of high-end tablets. Simply put, the new Broadwell mobile processors offer more flexibility. 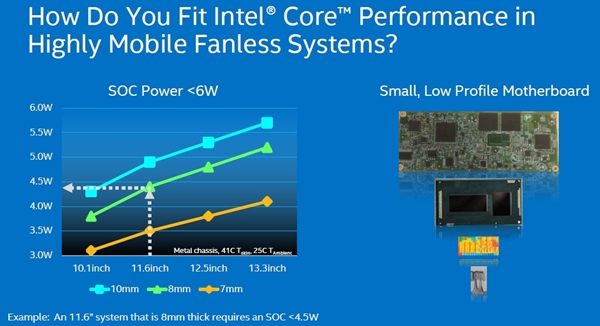 Speaking of design flexibility, the low thermal power envelope of the Broadwell mobile chip, and its ability to be cooled passively, enables the chip and its small, low-profile motherboard to be featured in devices that are less than 9mm in thickness. With reference to the graphs that plot SoC power against screen display screen size, the new Intel Core M processor is ideal for such fan-less, computing devices with 11.6-inch displays.

In terms of performance, Intel claims an improvement of up to 47% for 3D graphics, and for light media editing, a gain of up to 11%. These figures are obtained by comparing the Intel Core M-5Y70 Broadwell CPU against the previous generation Intel Core i5-4302Y. To make it a level playing field, the older Haswell CPU had its TDP lowered to 4.5W, the same level as the new Broadwell Core M processor. 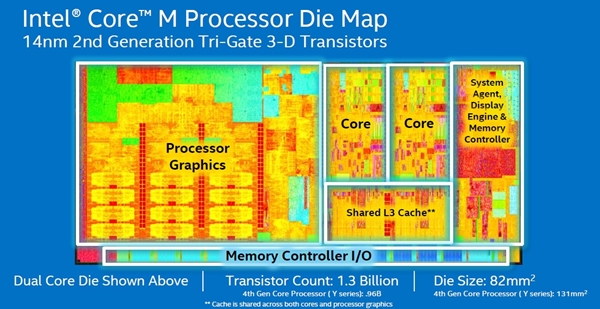 The integrated graphics engine of the 5th generation systems on chip have been upgraded to Intel HD Graphics 5300, and its maximum graphics frequency is rated up to 850MHz. It supports up to Ultra HD video resolution of 3,840 x 2,160 pixels. Its support for features like Intel Quick Sync Video, Intel Clear Video HD, and Intel Wireless Display will ensure a rich multimedia user experience. 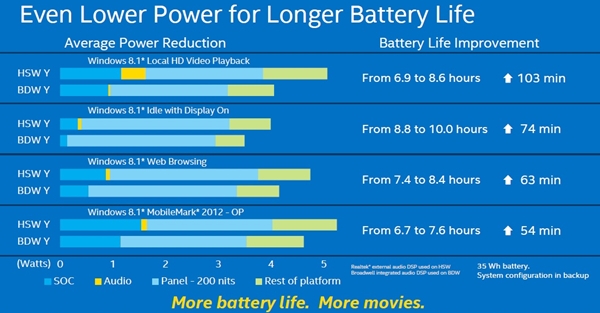 The company is also quick to emphasize the lower power consumption levels of the Broadwell mobile processor. Some of these energy savings can be partly attributed the Intel Smart Sound technology offered by the chip’s on-die digital-to-analog converter (DAC) that offloads audio processing from the CPU cores.

For corporate business IT systems, the Intel Core M-5Y70 will ship with Intel vPro technology support. Incidentally, it is also the most high-end Broadwell M processor at launch. Currently, there are three SKUs of these processors, and they are all priced at US$281 for 1Ku. Intel reports that come October this year, there will be more than 20 Intel Core M-based systems from five OEMs. These systems will address the computing needs of both corporate and end-user customers. At Computex this June, we reported about the upcoming availability of such systems. Hence, it appears that Intel is keeping its end of the bargain up.

Join HWZ's Telegram channel here and catch all the latest tech news!
Our articles may contain affiliate links. If you buy through these links, we may earn a small commission.
Previous Story
Sony unveils Xperia Z3, Z3 Compact and the Xperia Z3 Tablet Compact mobile devices
Next Story
Apple's next iPhones to be called iPhone Air and Pro?