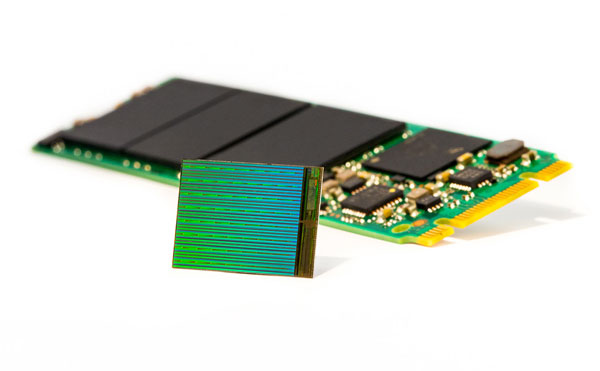 Intel and Micron have announced the availability of their 3D NAND technology, touted as the world’s highest-density flash memory. The new technology is a result of a joint development effort between Intel and Micron, where layers of data storage cells are stacked vertically with great precision to enable much higher-capacity devices than older 2D NAND technologies.

2D planar NAND flash memory is nearing its practical scaling limits, posing a challenge for the memory industry which needs to keep up with growing demand for more flash storage, especially as the price per gigabyte continues to fall. Enter 3D NAND technology, which will enable more storage in smaller form factors, bring about significant cost savings, lower power usage and high performance to mobile consumer devices as well as demanding enterprise applications.

3D NAND technology is not new, and Samsung already has its own 3D NAND technology which we saw on last year’s Samsung 850 Pro SSD. However, the new Intel-Micron technology should help further quell murmurings of the demise of Moore’s Law and enable greater competition in the 3D NAND space, which is good news for consumers. 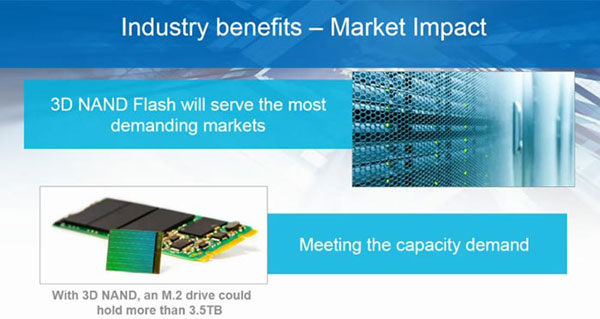 Intel and Micron’s 3D NAND technology differs from other 3D NAND offerings in its decision to utilize a floating cell gate, a design universally utilized in planar flash manufacturing. Other 3D NAND technologies such as Samsung’s 3D V-NAND and the recently-announced Toshiba Bit Cost Scaling (BiCS) utilize Charge Trap Flash (CTF) technology, which places an electric charge in a holding chamber and relies on non-conductive materials to reduce electron leakage.

This is the first use of a floating gate cell in 3D NAND, and the decision to use a design that has been refined through years of high-volume 2D flash manufacturing represents a key design choice to enable greater performance, quality and reliability. The flash cells are stacked vertically in 32 layers to achieve 256Gb multi-level cell (MLC) and 384Gb triple-level cell (TLC) die that fit within a standard package. These capacities can enable gum stick-sized SSDs with more than 3.5TB of storage and a staggering 10TB in standard 2.5-inch SSDs. And because capacity is achieved by vertical stacking, individual cell dimensions can be considerably larger for the same capacity when compared to 2D NAND. This is expected to increase both performance and endurance and make even TLC designs well-suited for data center storage.

The 256Gb MLC version is already sampling with select partners, and the 384Gb TLC design will be sampling later next quarter. Intel and Micron estimate that both devices will be in full production by the fourth quarter of 2015 and are also developing individual products to be available within the next year.