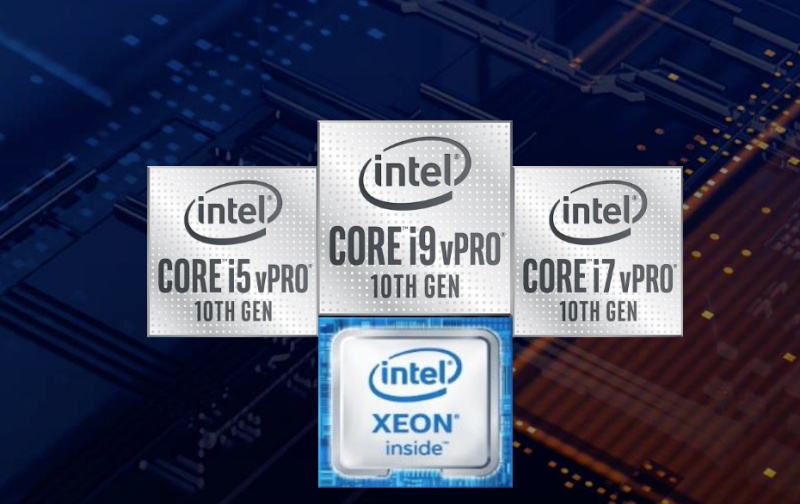 Intel's new 10th Gen Core vPro processors (based on the consumer series codenamed Comet Lake), will deliver better performance, improved security, easier manageability and platform stability the company said in a briefing to the media. This follows other announcements the company made in April around for the end-user platform.

Building in improvements along with security

Intel said that business enhancements were included from the very start of the design process so as much of them as possible would be built into the processor. Solutions like integrated Wi-Fi 6 connectivity to provide more reliable performance, and manageability technologies to address new and emerging challenges for IT and users. Wi-Fi 6 is quite a different beast over previous Wi-Fi standards, so do check out our Wireless 802.11ax feature (now renamed to Wi-Fi 6) that details these changes that enable big updates for home and offices alike. 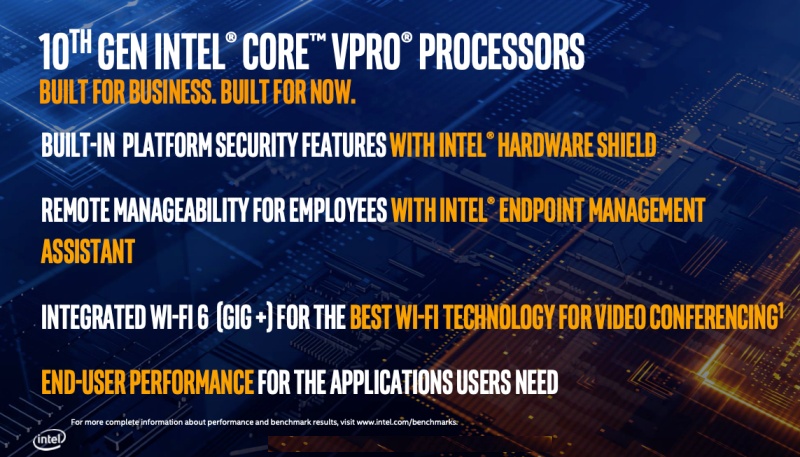 These include Intel’s Hardware Shield, endpoint management assistant, video conferencing technology, end-user performance that are all silicon-level enhancements much like in previous Core microarchitecture.

For improved enterprise security, for example, Intel’s Hardware Shield, a v-Pro specific layer of security that protects against firmware attacks, can step in and lock down mission-critical information in the underlying BIOS that directly controls the hardware. It also prevents intrusions and attacking/hijacking data in transit such as what's in the system memory, thanks to memory encryption.  All of these are already present in the previous generation vPro processors. What's really new on the 10th Gen Core vPro processors is advanced threat protection and detection. So if an attack does occur, the new vPro processors can shift some functions on to the GPU, allowing the CPU to keep working and maintain mission-critical system capabilities. This is only made possible because the new vPro capabilities can better communicate with the operating system to better manage these transitions.

According to Intel, devices based on the new processors will provide new levels of performance for demanding applications. Quoting performance compared to a three-year-old office systems, laptops with the new Comet Lake-based Intel 10th Gen Core vPro processors inside will have 40% better overall application performance and be 36% more productivity. Number-crunching and data visualization is also improved with new devices stated to offer up to 44% more performance than laptops based on five-year-old technology.

At face value, it might seem that Intel is just trumping their best-case figures, but the fact is that with with the increased virtual threat environment we live in these days, business systems are running ever more monitoring and security agents in the background for self-defence. Add to the increased levels of performance expectations and responsiveness of a system versus a mobile phone, modern business systems do have to keep up. As such the new hardware features in the latest microarchitecture employed in the 10th Gen Core vPro processors are designed to meet these needs.

But as usual, knowing the SKUs or what should be in a premium laptop you’re paying top dollar for is important.

The top Intel H-series mobile processor is a Core-i9-10855H part with 8 cores and can process 16 threads simultaneously with Hyper-Threading technology. Targeted at creative professionals with extreme needs, the CPU is rated at with a 45W TDP, so don't expect that it in a slim packaging anytime soon as good cooling is necessary to keep this 2.4GHz processor with so many cores running optimally. There's also a the Xeon version of the same, W-10855M, for more critical workloads where ECC memory options are preferred to minimize memory-related errors. Plus, there's also a 6-core part running at a higher base clock speed of 2.8GHz if your applications thrive more on clock speeds than core-count.

At the other end of the scale, you've a Core-i5 with only 4 cores and 8 threads, for the mass-market budget conscious needs who still need a fairly decent processor for handling most modern tasks.

On the desktop side of things, processor configurations go up to 10-cores, higher clock speeds and available in single-processor Xeon versions too. 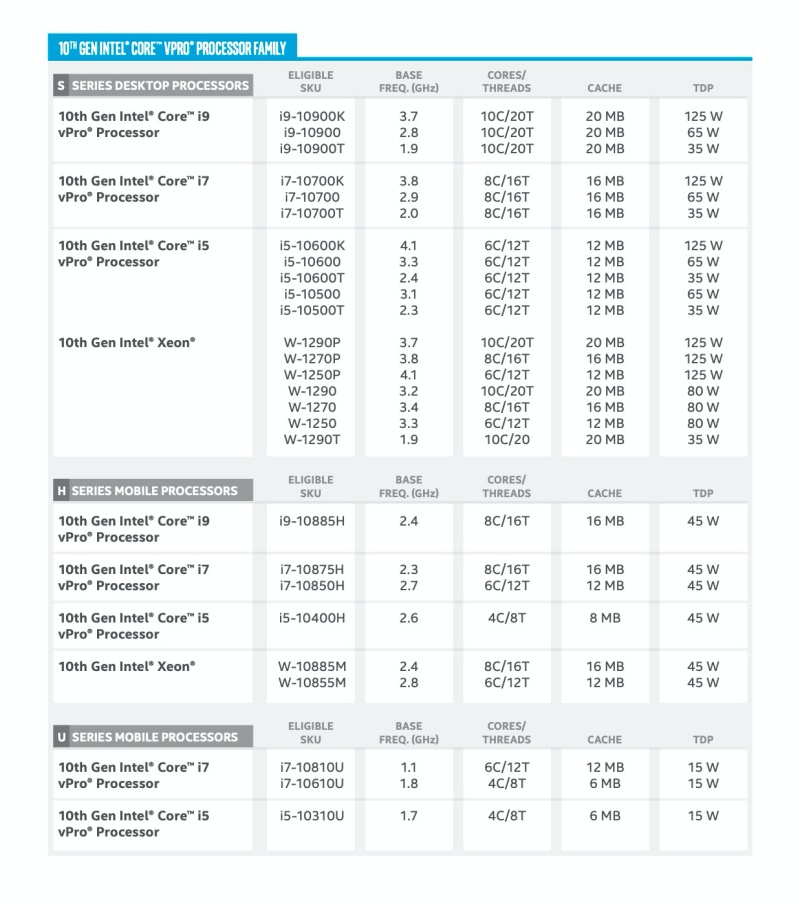 Well we know the laptop partners

Intel spoke of their laptop OEM partners like Dell, Lenovo, and HP, all planning to launch new laptops powered with the new processors. And some will be based on Project Athena standards that Intel first announced at CES 2019. So if you're looking for the most cutting-edge experiences, look out for systems with this logo.

They didn’t, however, talk of motherboards but we should expect to hear from them soon given the general release of Comet Lake. At this point of time, Gigabyte has a Vision series motherboard to support these new desktop processors and it uses an Intel W480 chipset. We'll know more details soon enough.

Built for business, the Intel vPro platform is a comprehensive PC foundation for performance, hardware-enhanced security, manageability, and stability. With our new 10th Gen Intel Core vPro processors, we’ve enhanced that solid PC foundation to help tackle not only today’s challenges but also those of future work environments across the PC lifecycle.

Not just an Intel party

Intel isn’t the only one launching a new generation of processors. Earlier this week AMD announced the global availability of its Ryzen Pro 4000 series of mobile business processors.

Designed for the new normal of remote work and capabilities and modern productivity, the Ryzen Pro 4000 Series mobile processors, not only pack up to 8 cores and 16 threads but also have new security features and improvements to battery life and performance. You can read more about them here.

Join HWZ's Telegram channel here and catch all the latest tech news!
Our articles may contain affiliate links. If you buy through these links, we may earn a small commission.
Previous Story
Singapore has 6th-fastest mobile data download speeds in the world: OpenSignal
Next Story
Powerbeats Pro rumoured to come in four new fun summer colours