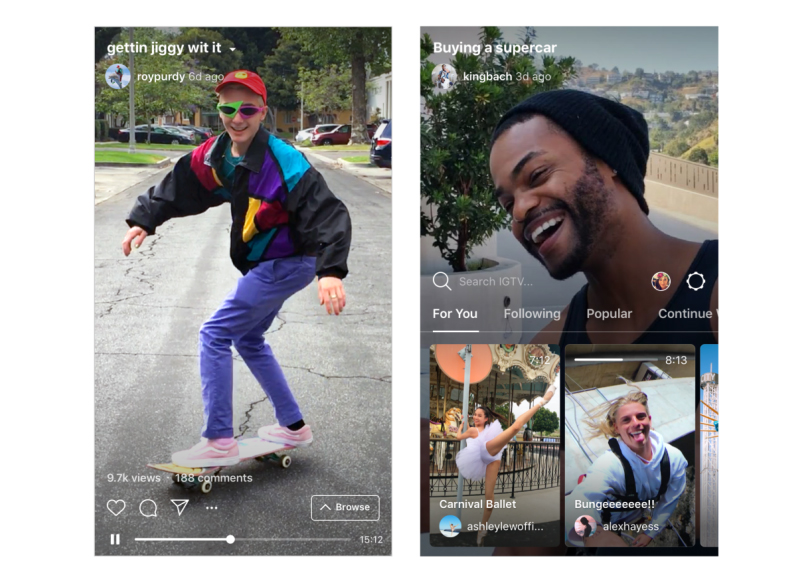 Instagram is ready to go after YouTube. The Facebook-owned company today announced IGTV, a standalone app that will allow users to upload longer videos up to one hour in length. That’s a huge jump over the one-minute limit on the current Instagram app, and one that content creators will appreciate.

However, this is still Instagram, and IGTV will continue to play vertical video.

Instagram CEO Kevin Systrom says the new app is supposed to make it easier to find and watch videos from your smartphone. While most video apps require you to search or browse through a recommended list of videos before you can start watching, IGTV will automatically start playing video once you launch it.

That’s not unlike what you get with regular television, hence the app’s name. IGTV exists as a standalone app, but it will also be accessible from a button inside the home screen on the main Instagram app.

In addition, it will spotlight popular videos from Instagram celebrities, providing further incentive for content creators to get on the platform.

Not everyone will be able to upload hour-long videos however, and only larger accounts will be able to do so. Everyone else will be restricted to 10-minute long clips for now, but Systrom says the company plans to eventually allow all users to post videos of unlimited length.

Creators will also be able to set up their own Instagram channel that people can subscribe to. These videos will support links in their descriptions as well, so creators have more freedom to drive traffic elsewhere.

One interesting thing to note is that there will be no ads on IGTV at the beginning, although Systrom also talked about plans for future revenue-sharing deals with partners. However, Instagram isn’t paying any creators directly for IGTV videos at the moment.

With an impressive 1 billion users on Instagram, IGTV will be an attractive platform for creators trying to grow their audience. The company also invited several Instagram stars to its launch event, including Fortnite streamer Ninja, Lauren Riihimaki, and Lele Pons.

YouTube still holds a big advantage with its massive creator base, monetization options, and status as a dedicated home for videos, but IGTV – and other video initiatives by Facebook and Snapchat – hope to become viable alternatives for users to watch videos on their phones.

IGTV is now available on both Android and iOS.

Join HWZ's Telegram channel here and catch all the latest tech news!
Our articles may contain affiliate links. If you buy through these links, we may earn a small commission.
Previous Story
HP has managed to squeeze a Bluetooth speaker into a small inkjet printer
Next Story
MyRepublic launches three mobile plans for all users