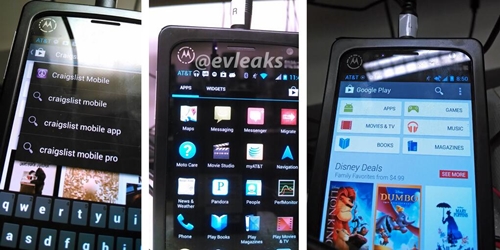 We've heard rumors about a collaboration between Google and Motorola on "X" devices, but haven't seen the devices in flesh until today. @evleaks released a set of leaked images showing a Motorola device concealed in a "blackbox" casing.

According to PhoneArena, the pictures show the real deal. The Motorola "X" phone also has a codename, Ghost. PhoneArena's sources claim that the device is made up of polycarbonate, not metal or Motorola's traditional Kevlar. Ghost is slated for a release on U.S telcos Verizon and AT&T, but will support all major telcos.

The device is still scheduled for release in early July despite speculation that its release is delayed to August or later. Rumored specs include 32GB internal storage memory, 2GB RAM, a 4.7-inch Full-HD display and a choice of over 20 colors.

Droid-Life previously reported that the device is tentatively set for a release in July and will be sold at similar price points as the Google Nexus 4. Ghost stirred up much interest in the tech industry after Telstra Chief Technology Officer, Hugh Bradlow told senior mobile staff that it will be a "game changer" with "real breakthrough" features and capabilities not seen on any smartphones today.

Recently, Google chairman Eric Schmidt claims that Motorola's next generation of products are going to be "phenomenal" and consumers can expect to see them "sooner rather than later". Whether or not these claims are true, we will know in less than two weeks at Google I/O 2013.