The universal microphone stand adapter for iPhone and iPod touch

MODENA, Italy - IK Multimedia is pleased to announce iKlip MINI, the universal microphone stand adapter to support iPhone and iPod touch devices on stage, in the studio, at school or in the office, is now shipping. 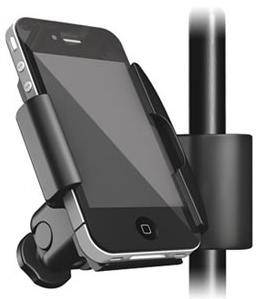 Modelled after the popular iKlip for iPad, iKlip MINI firmly holds your iPhone and iPod Touch in place in both horizontal and vertical positions. iKlip MINI's multi-angle adjustable design provides optimal viewing and accessibility to all controls, buttons, connection ports and camera free from obstruction. It can also be easily rotated from portrait to landscape position by simply loosening or tightening a knob with no need for tools. It can be mounted on the vertical pole of a mic stand as well as on its horizontal boom.

Whether playing live or practising, iKlip MINI can be used for many types of musical activities such as effects editing, score viewing, DJ work and karaoke singing. Plus, it can also be used for other practical applications such as taking steady pictures or capturing video.

Users of iRig, another popular IK Multimedia mobile accessory device, can support their guitar interface adapter with the iKlip MINI with the included detachable bracket mount. This makes iKlip MINI the perfect accessory for the AmpliTube range of apps or any other guitar effects app.

iKlip MINI is also ideal for another IK Multimedia mobile accessory, iRig Mic, the handheld microphone for iOS devices, that allows singers to conveniently operate the device at a close distance on the same mic stand with their device running IK's VocaLive or any other vocal processing app.

The iKlip is available at authorised IK Multimedia music and electronic retailers worldwide or from the IK online store for only €29.99 (ex. tax).