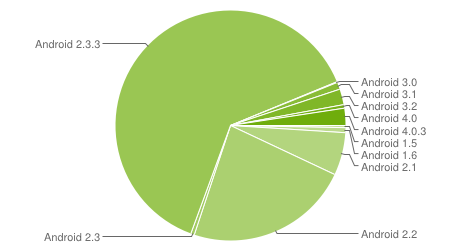 The data, gathered by Google within a 14-day period ending on April 2, 2012 through Google Play, highlights a long-running weakness of the open-source operating system. Besides the aforementioned lacking presence for its latest Android 4.0 operating system, Google is also faced with the challenge of working with its hardware partners and developers on the differences between the Ice Cream Sandwich and Gingerbread variants.

In other words, fragmentation is more evident than ever.

Will this be a permanent fixture? Fortunately, no. In the months to come, vendors will be updating their existing lineup with Android 4.0, some of which have been rolled out such as HTC and its Sensation series. Sony Mobile Communications are on track, though slightly delayed, with the Ice Cream Sandwich upgrade for their Xperia smartphones, starting with the Xperia Arc S, Xperia Neo V and Xperia Ray in mid-April.

Firmware upgrades aside, new Android 4.0 smartphones such as the HTC One series, and many others that were announced at Mobile World Congress 2012, will be hitting retail shelves within this quarter. Further to that, Android 4.0 will be a unifying OS for both smartphones and tablets. While tablets have fared less favorably in the market share with Google Android 3.0 Honeycomb, companies such as ASUS and Sony are also pushing the Ice Cream Sandwich update to its tablet lineup.

Will Android 4.0 become the dominant version for Android devices in the months to come? With the updates and new devices coming right up, it could lessen but not totally eliminate the fragmentation issue.

Join HWZ's Telegram channel here and catch all the latest tech news!
Our articles may contain affiliate links. If you buy through these links, we may earn a small commission.
Previous Story
Introducing the New and Improved EVGA Global Warranty
Next Story
Sony Ericsson Xperia Lineup Getting Android 4.0 Update in March 2012 (Updated)