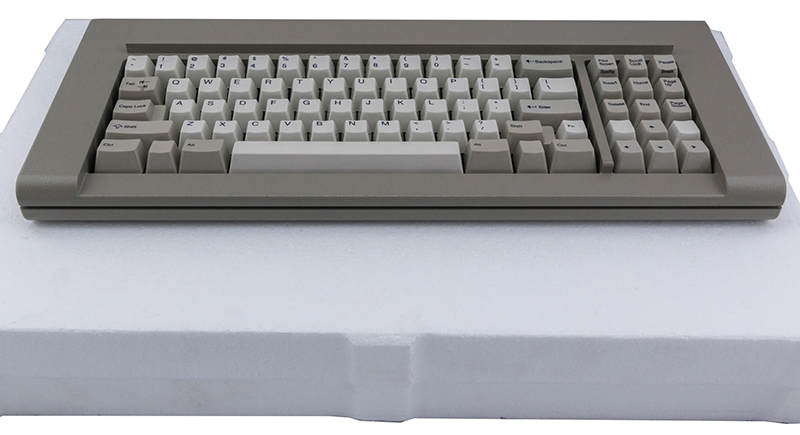 Feeling nostalgic about the 1980s? There may now be a way to purchase a piece of that era. Joe Strandberg, a keyboard enthusiast and Cornell University graduate, has spent US$100,000 over the past months to get a factory in China set up to produce copies of the IBM Model F mechanical keyboard.

These will be identical to the models IBM made in the 1980s, and feature the venerable buckling spring switches.

Buckling spring switches are very different from today’s Cherry MX switches. When a key is pressed, the spring below it buckles instead of compressing, and this motion pivots a plastic plate under the spring and causes it to make contact with the PCB and metal plate below.

This creates a tactile feedback and a loud, distinct “clack” sound that comes from the spring buckling.

The original Model F started production in 1981, and it boasted a heavy die-cast zinc body that keyboards today would be hard-pressed to match. It was soon succeeded by the cheaper Model M, which replaced the metal with more affordable plastic.

Strandberg worked hard to recreate the Model F, working with the factory in China to reproduce details like the bumpy powder-coating on the original’s zinc case and IBM’s specifications for individual keys.

This is no fool’s errand, and Strandberg has received pre-orders for over 500 new keyboards, amounting to around US$270,000 in sales. There are people willing to pay top dollar for a classic, and this new Model F is anything but cheap.

It starts at around US$325 for a board without keys, but can go as high as US$400 depending on the options you pick. There are two main options available – an F77 model with a number pad and a smaller 60 per cent F62 “Kishsaver” keyboard. That said, the Model F debuted at US$600, which translates to about US$1,700 today, so that might make the price easier to swallow.

You can check out the keyboards for yourself here. Pre-orders are open till 31 July. After that, the next time you’ll be able to get one will be when Strandberg goes through with his second production run a year later.

Join HWZ's Telegram channel here and catch all the latest tech news!
Our articles may contain affiliate links. If you buy through these links, we may earn a small commission.
Previous Story
Tesla will build the world's largest battery in South Australia
Next Story
Hydrogen One smartphone by RED comes with ‘holographic’ display