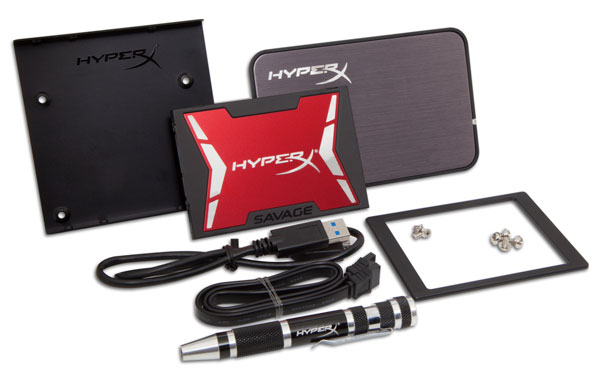 Even though PCIe and next-generation form factor (NGFF) drives like the HyperX Predator PCIe SSD and the Samsung 850 EVO M.2 drive may be grabbing most of the headlines these days, there’s still life in more traditional 2.5-inch SATA-based drives.

While the HyperX Fury and HyperX 3K SSDs featured understated monochrome designs, the HyperX Savage sets itself apart with a striking red steel and aluminium case. It measures just 100 x 69.9 x 7mm, and its low profile design means that it will fit into most notebooks, desktops and small form factor PCs.

The new drive utilizes a quad-core, eight channel Phison PS3110-S10 controller, which we also saw on the recently-announced Patriot M.2 Ignite series SSDs. It will ship in 120GB, 240GB, 480GB and 960GB capacities, so you’ll be sure to find a price and capacity configuration that works for you.

In addition, all capacities of the HyperX Savage can be purchased either as a standalone SSD or with an upgrade bundle kit that includes a 2.5-inch USB 3.0 enclosure, 3.5-inch bracket, mounting screws and even a multi-bit screwdriver. These are nice additions, and HyperX clearly intends for the drive to be compatible with a wide range of system builds and use cases.

We don't have any information on suggested retail pricing yet, but the drives and the upgrade bundle kits can already be found on Amazon.

Our articles may contain affiliate links. If you buy through these links, we may earn a small commission.
Previous Story
NZXT debuts Noctis 450 mid-tower case with focus on design and cooling
Next Story
Facebook adds video calling to Messenger