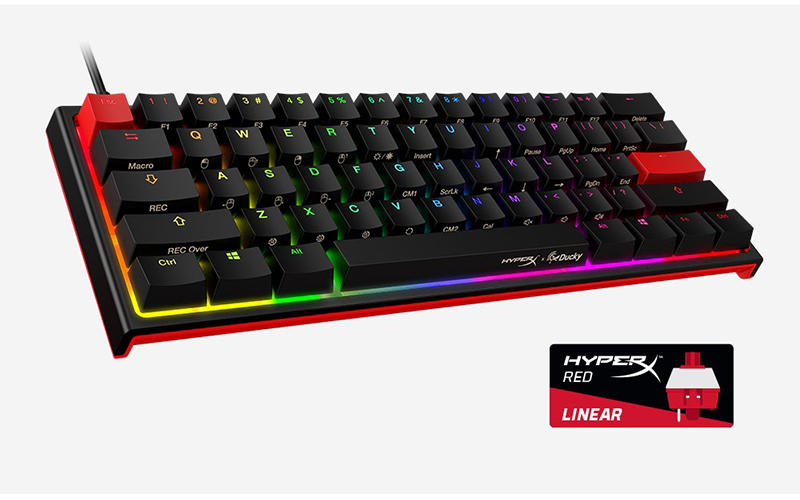 HyperX and Ducky have teamed up to launch the HyperX x Ducky One 2 Mini mechanical gaming keyboard, a limited edition version of Ducky's popular 60% model. And instead of Ducky's usual Cherry MX switches, the keyboard will use HyperX's red linear mechanical switches, which are rated for up to 80 million key presses.

The keyboard features the same design as the original One 2 Mini, but the bottom half has been coloured a bright, glossy red. HyperX's and Ducky's logos are also stamped on the back, so you're out of luck if you were hoping for minimal branding.

The PBT doubleshot keycaps are great news though, and they should outlast the stock ABS keycaps found on many other gaming keyboards. They're less prone to shine, which means they'll remain in mint condition for far longer. Secondary functions are also helpfully printed on the sides of the keycaps, in case you need help adapting to the smaller form factor.

On top of that, the HyperX x Ducky One 2 Mini ships with a Ducky-branded keycap puller, additional coloured caps, and a Year of the Rat spacebar for you to further customise the look of the keyboard. And since this is a pretty standard 60% layout, you should have little trouble finding third-party keycaps for it too.

I also like the use of a detachable cable and USB-C, considering that way too many gaming keyboards today are still stuck on micro-USB (looking at you, Logitech). The flip-out keyboard feet support two different typing angles as well, so you have some room to experiment with tilt angles.

HyperX's linear red switches have an operating force of 45g, which puts them in the same ballpark as Cherry MX Reds. However, they have slightly shorter total travel and actuation distances, at 3.8mm and 1.8mm respectively. They also use an exposed LED at the top of the switch, which supposedly produces brighter and more vibrant lighting.

You can customise the lighting effects with Ducky Macro 2.0, which supports onboard keyboard controls.

Only 3,700 units of the HyperX x Ducky One 2 Mini will be available worldwide, and each keyboard is laser-marked with a unique edition number on its base. It will be available to buy here at S$179 starting on 13 May.