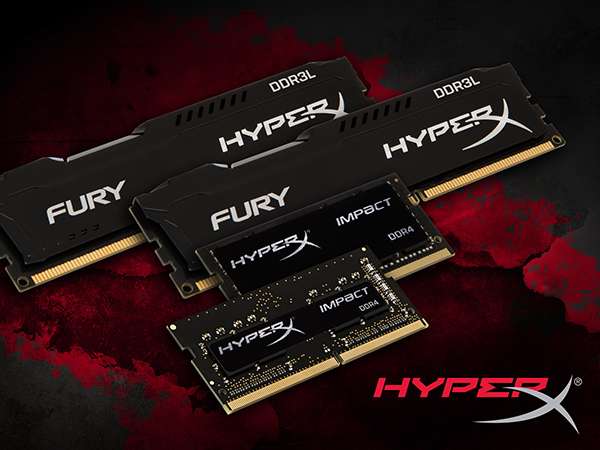 As Intel’s Skylake CPUs begin trickling out into the market, memory manufacturers are scrambling to release new modules that will be compatible with the new generation of hardware. Kingston HyperX has now announced new low-voltage Fury DDR3L memory kits and Impact DDR4 SO-DIMMs for notebooks and small form factor PCs.

The HyperX Fury DDR3L modules run at 1.35V, down from 1.5V on DDR3, which is no longer supported on the Intel Z170 chipset. They will be available in 1600MHz and 1866MHz frequencies and in kits of either 8GB (2x4GB) or 16GB (2x8GB). The design is similar to the DDR4 Fury modules, with a black asymmetrical heatspreader and black PCB for a sleeker look.

The DDR3L Fury kits support automatic overclocking, so they will boot up at their rated specification right out of the box. However, most of the Intel Z170 motherboards we’ve seen so far support only DDR4 memory, so these kits will likely make their way onto lower-end, budget boards or more business-oriented Intel 100 series chipsets.

The brand new HyperX Impact DDR4 SO-DIMMS also support automatic overclocking, so you’ll get overclocked memory right out of the box on notebooks, mini PCs, and SFF systems based on Intel’s 100 series chipset. The Impact DDR4 SO-DIMMs come in frequencies ranging from 2133MHz to 2666MHz, available in 8GB and 16GB kits of 2. They can also be purchased singly as 4GB and 8GB modules.

These will likely be hidden from view in your system, but they do still sport an all-black design with black heatspreaders and PCB.

Join HWZ's Telegram channel here and catch all the latest tech news!
Our articles may contain affiliate links. If you buy through these links, we may earn a small commission.
Previous Story
6-inch Oppo R7 Plus launching this Saturday
Next Story
LG to ship limited edition 23-karat gold Urbane Luxe smartwatch