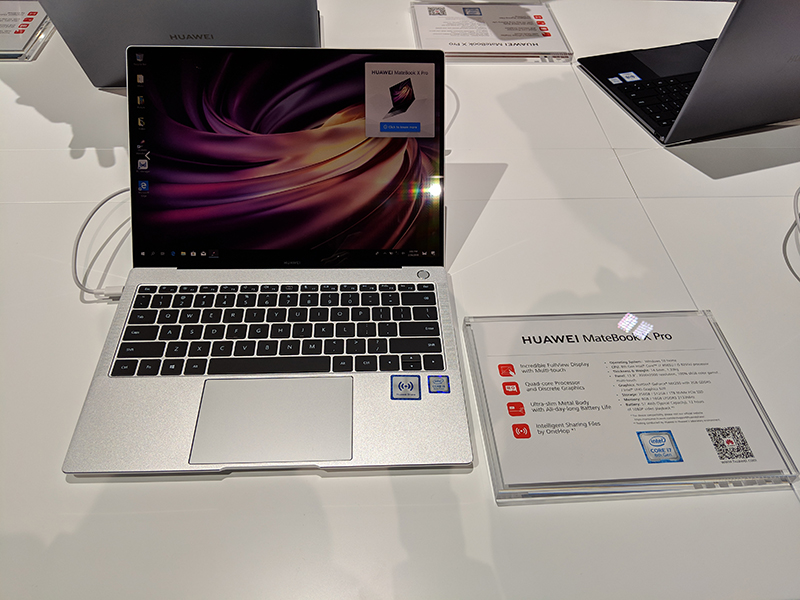 Huawei has announced a version of its excellent MateBook X Pro laptop. The new model looks much as it did before, so Huawei is clearly sticking to a proven formula. However, it does come with faster hardware, including the new NVIDIA GeForce MX250 graphics, faster connectivity options, and more storage than before.

The one key visual difference between the new MateBook X Pro and its predecessor is found on the lid, where the logo is now simply just Huawei's printed name instead of the full logo. This makes for a more minimalist and subdued look, and I think it's an improvement.

Here's an overview of the new specifications:

The display boasts a peak brightness of 450 nits and 100 per cent coverage of the sRGB color space. It also has super slim bezels on three sides for a more immersive experience, while the 3:2 aspect ratio means that it should be pretty good for reading and viewing documents.

It has the same selection of two USB-C and one USB-A port as its predecessor, but the Thunderbolt 3 port has now been improved to include the full four lanes of PCIe 3.0 x4 bandwidth. This means that it is now capable of supporting external GPUs via a Thunderbolt 3 dock, including the new NVIDIA GeForce RTX 2080, according to Huawei.

The laptop's metal body measures just 14.6mm, so it should fit easily into your backpack. Huawei is claiming up to 12 hours of 1080p video playback, but you'll have to wait till reviews are out to get a better idea of its battery life.

The webcam is once again hidden in the keyboard's function row, and it pops up when you hit the corresponding key. It's a creative solution, but the low angle is still not the most flattering look for anyone.

Other changes are found in the software, where you can now slide three fingers down the screen to take a screenshot, which sounds pretty nifty. Better still, you can also easily crop parts of the screen immediately after capturing it. Huawei is also citing an optical character recognition feature that can recognize text from screen grabs and allow you to easily paste selected text into emails or documents.

On top of that, a new feature called OneHop lets you quickly share photos, videos, and files with a single tap. This is part of Huawei's Share 3.0 feature suite, and it connects the company's phones and laptops via NFC. Once you bring a phone to the Huawei Share sticker, it will send files immediately, and vice versa. Of course, the biggest limitation of this feature is that you'll need both a Huawei phone and laptop to use it.

Join HWZ's Telegram channel here and catch all the latest tech news!
Our articles may contain affiliate links. If you buy through these links, we may earn a small commission.
Previous Story
The affordable Nokia 4.2 and 3.2 have big screens, run Android Pie, and support face unlock
Next Story
Huawei's Mate X foldable phone is thinner than the Galaxy Fold