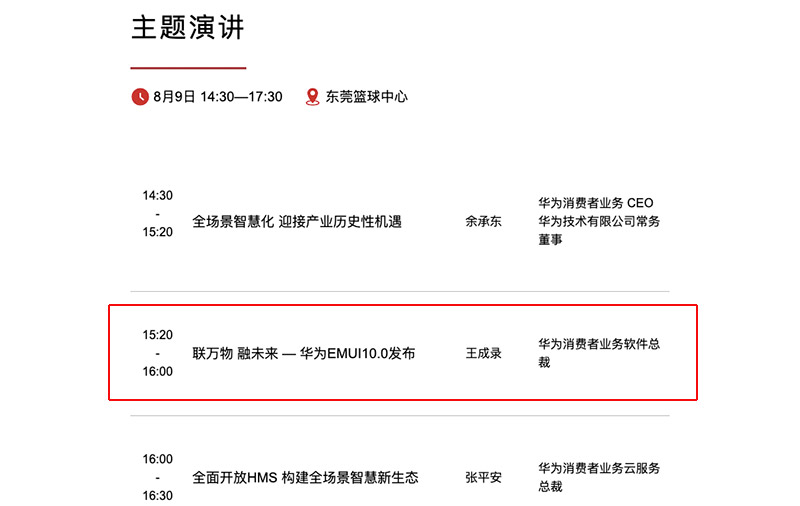 According to this agenda listed on Huawei’s developer website, the Chinese smartphone maker is set to announced the next major version of its mobile user interface EMUI 10.0 on Aug 9, the first day of the 2019 Huawei Developer Conference.

For the uninitiated, Huawei’s EMUI currently stands at version 9.1, and can be found on devices such as the flagship P30 series. But the list is growing as Huawei has announced that it targets to bring the OS to 49 other Huawei and Honor devices. EMUI 9.1 is based on Android 9 Pie, while the upcoming EMUI is based on Android Q, which itself is currently in beta but expected to be finalized in August.

To be clear, EMUI 10 isn’t the same thing as the in-house “HongMeng” OS that Huawei is currently building. EMUI is Huawei’s version of Android, while HongMeng (aka Ark or Oak OS) is an Android app-compatible OS that Huawei aims to use on its products in the future—or when, you know, it’s forced to stop using Android or Windows due to the U.S. restrictions.

In any case, expect to hear more about EMUI and HongMeng this Aug 9. Huawei’s CEO Yu Chengdong and its software chief Dr. Wang Chenglu are both confirmed for the keynote.

Other than the new OSes, Huawei is also expected to talk about its latest 5G progress and unveil new development tools at HDC 2019.

Previous Story
The Sigma fp is the world's smallest and lightest full-frame mirrorless camera
Next Story
Retail prices of the Samsung Galaxy Note10 could start from US$1,125