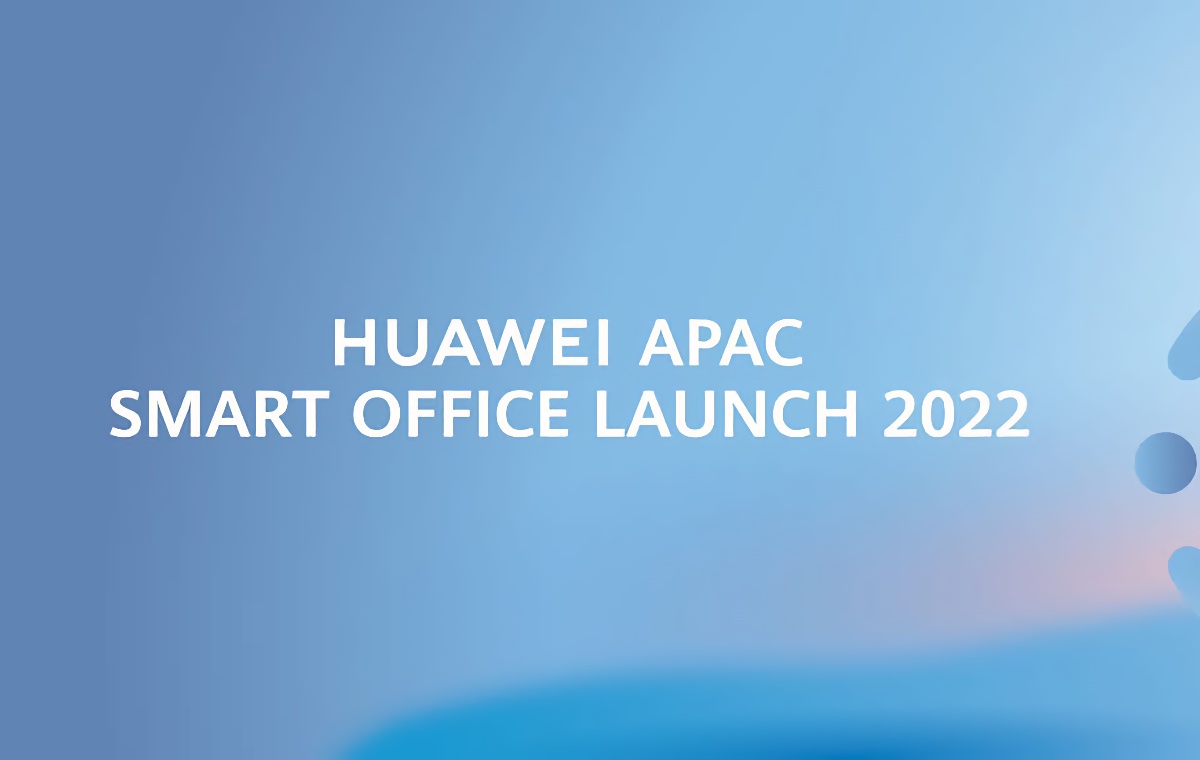 During Huawei's APAC Smart Office Launch 2022 in Thailand, the company showed off a wide range of Smart Office products that are coming for APAC customers.

Of these, we’ll be looking at the main devices as they are intended for business use.

Huawei’s 1+8+N strategy has a smartphone centrally connecting and controlling the broader devices that form its wider ecosystem. The N refers to the third-party IoT devices which can be connected using Huawei HiLink and Huawei Share technologies.

And since 2018, Huawei has been working to build out its smart office framework, based on two core capabilities - cross-device collaboration and ecosystem integration.

For example, the MateBook 14s can be paired to a MatePad so the MatePad can be used as a secondary display. The MateBook 14s also pairs quickly with Huawei's wireless headphones like the FreeBuds.

Huawei’s latest release of this strategy extends its “Drag- to-Connect” capabilities to more devices, streamlining the process of connecting and interacting on multiple devices. 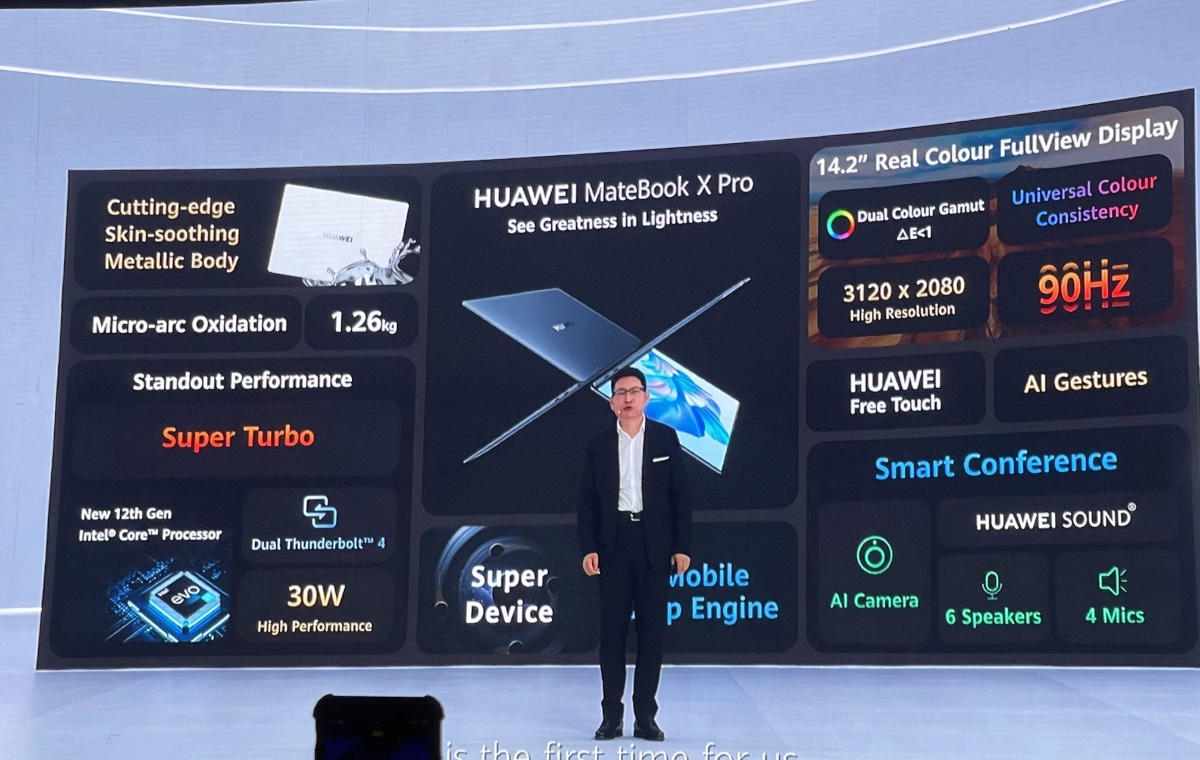 Coming in three colours and a metallic finish for the premium model, the new Huawei MateBook X Pro is designed for creators and is the first to support Huawei’s upgraded Super Turbo technology.

SuperTurbo is a system designed to give a boost to the performance of PCs. It optimises power consumption and works to achieve a more efficient and intelligent hardware functioning management.

Weighing 1.26kg, the MateBook X Pro comes with a 14.2-inch display with a 3,120 x 2,080 resolution and 90Hz refresh rate. It is also certified that it meets Intel Evo criteria and comes powered by Intel 12th Gen Core processors. But it only comes with Intel Iris Xe graphics due to Huawei having “logistical issues with regards to graphics cards” the company explained.

To meet the demand for communications on the move for hybrid workers, the MateBook X Pro has a new AI camera that comes with new gestures for the touchpad so that functionality is increased during video conferencing.

Included as well is Super Device. This is the Huawei term for the experience you get throughout their ecosystem. For example, if you use a Huawei smartphone, connect it to a Huawei MateBook X Pro, and you can use the same smartphone on it in the same way you’re used to. Want to print? Drag the printer and PC icons together and get it done. And it will all connect and work…seamlessly.

The 11-inch Huawei MatePad Pro 11 comes with an OLED “Real Color” display with a smooth 120Hz refresh rate. Weighing just 440g and a maximum thickness of 5.9mm, Huawei calls the MatePad Pro 11 “the lightest and thinnest 11-inch premium tablet of their brand”.

It also comes with two cameras, a 13MP main and 8MP ultrawide camera.

Multi-tasking is one key aspect of tablets so the Huawei MatePad Pro 11 deals with this by using what the company calls, Multi-Window.

Accessories this time round include the 1.5mm detachable Huawei Smart Magnetic Keyboard, although it does call to mind a Microsoft Surface Tablet.  Included is also the newly-enhanced Huawei M-Pencil (2nd generation) that now comes in white.

One new feature on the MatePad Pro 11 is Huawei Sound. Called a “first on a tablet” by Huawei, it offers users an instant cinematic immersion with six speakers. 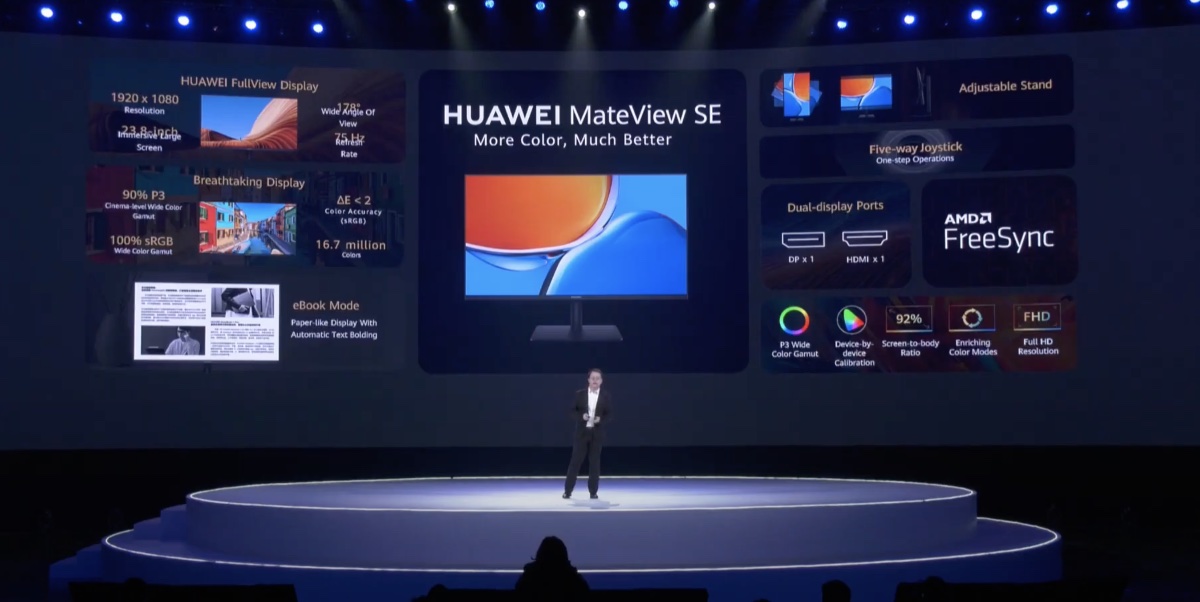 Shipping in only one size, the Huawei MateView SE, is a 23.8-inch IPS monitor.

To prevent eye-strain, the monitor also comes with an e-book mode that uses an e-paper, ink-on-paper effect, to make long-term editing and reading comfortable.

So users don’t strain their neck or eyes, the Adjustable Swivel Stand supports pivot rotation from 0° to 90°vertical pivot 0mm to 110mm up and down height adjustment, from -5°to 18° pitch angle adjustment and includes VESA wall mounting. 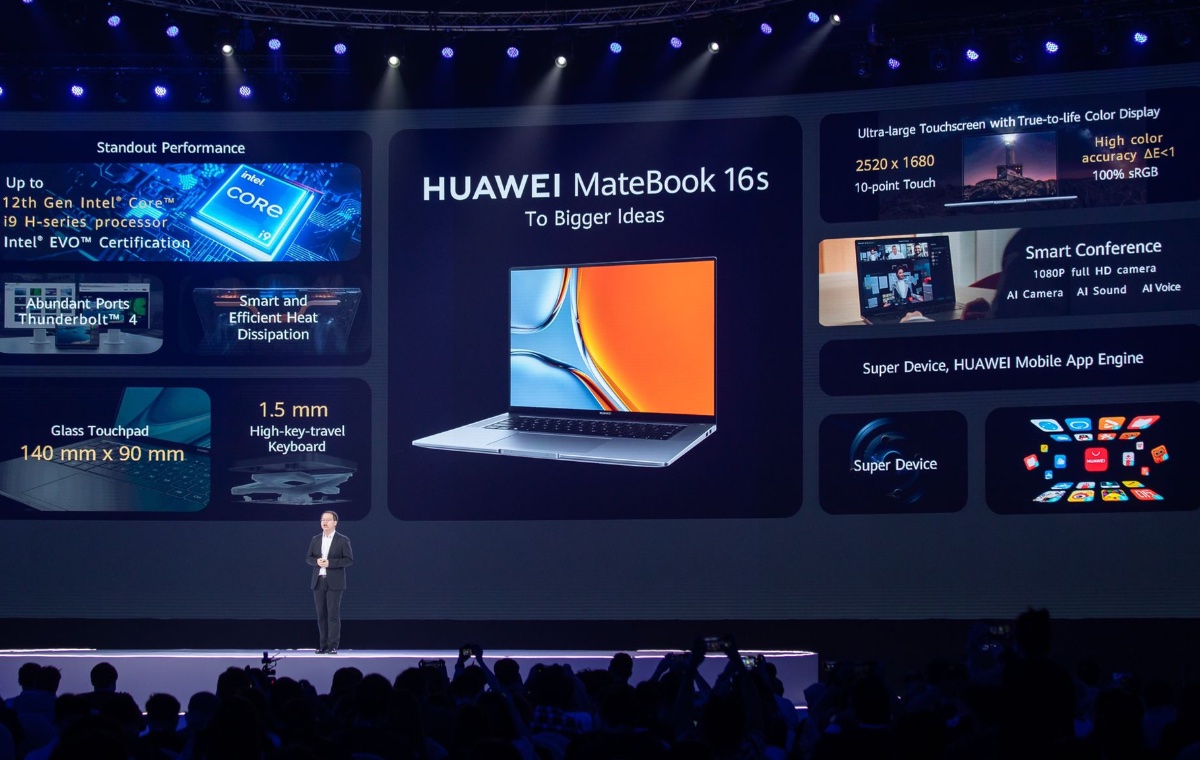 There are two models in the Huawei MateBook 16 series – the MateBook D 16 and MateBook 16s. 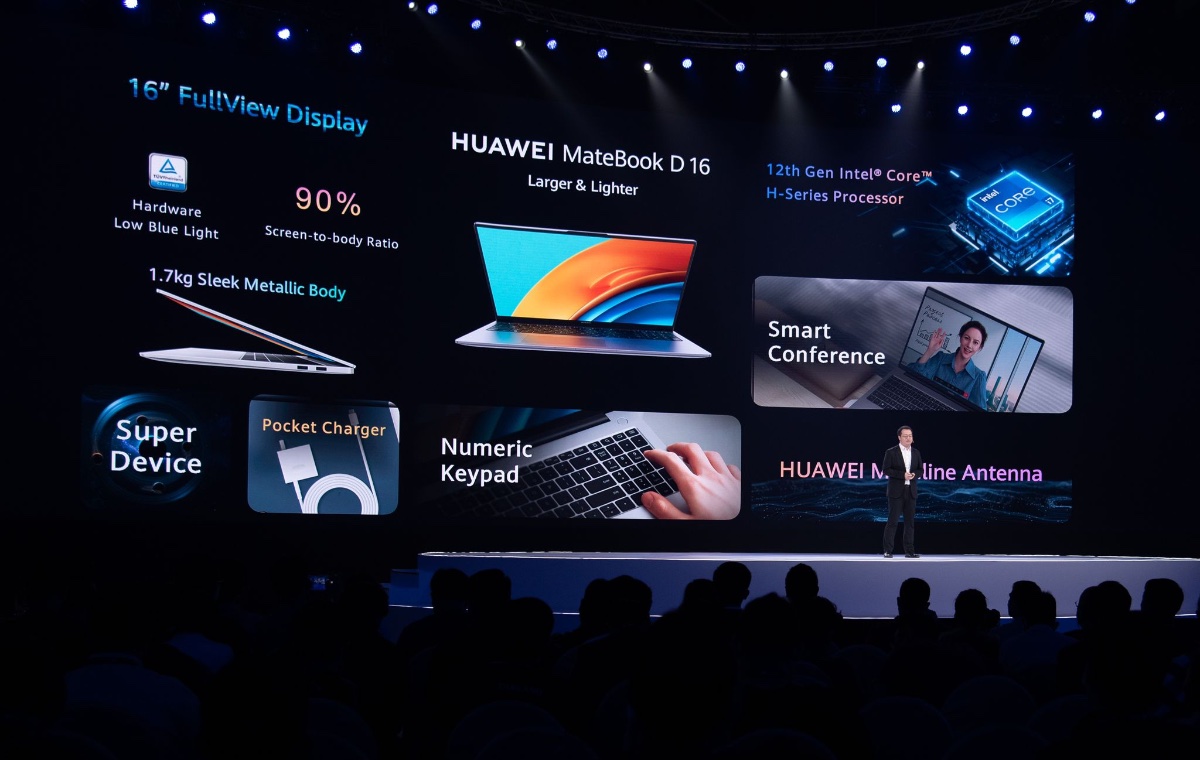 It also comes with Huawei’s new charger as well as support for fast charging. 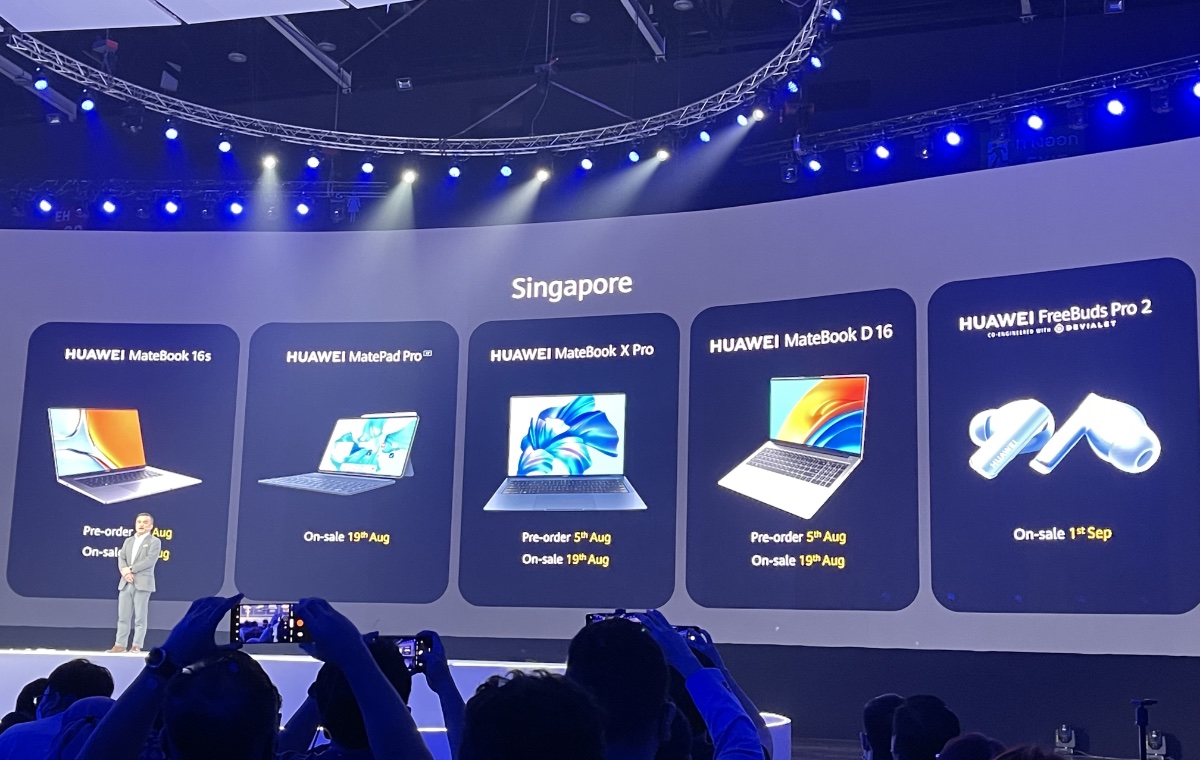 Huawei says that pre-orders will start from 5 August 2022 in Singapore and that more details on local pricing and availability will be released closer to date. We will update this article when we have more information.

The new Huawei Smart Office devices will be available in Singapore from 19 August 2022 at all Huawei Authorised Stores, retail partners Courts and Challenger, as well as Huawei official online stores in Lazada and Shopee.

As part of the retail launch, the company is holding a Huawei Smart Office Roadshow at 313@Somerset L1 Atrium from 18 to 21 August. During the event, attendees can get hands-on experience with the new devices and interact with Guests of Honour Mediacorp artiste, Romeo Tan, and YES 933 DJs, Siau Jiahui and Zhu Zeliang, who will be making a special appearance on the afternoon of 20 August.

In addition to the Smart Office 2022 devices, a range of other devices, including tablets, wearables, audio products, and smartphones will also be available at special promotional prices along with free gifts with a purchase during the roadshow.

Join HWZ's Telegram channel here and catch all the latest tech news!
Our articles may contain affiliate links. If you buy through these links, we may earn a small commission.
Previous Story
iPrice: Southeast Asians shop online outside of office hours; big spenders prefer desktops over mobile shopping
Next Story
Expect to see more ads on your iPhone in the future as Apple aims to triple its ad revenues