Huawei is demonstrating the Huawei MediaQ M310 at the MWC 2013. Measuring only 14mm slim, the media cube connects content from smartphones, tablets, and TVs, bringing the living room into a smarter era. Powered by a quad-core ARM9 processor, the MediaQ enables wireless projection via an HDMI in-connection, and together with a TV screen and an external camera, it provides exceptional video call quality. Also, its 32GB in-built memory can be further expanded via Micro SD cards. 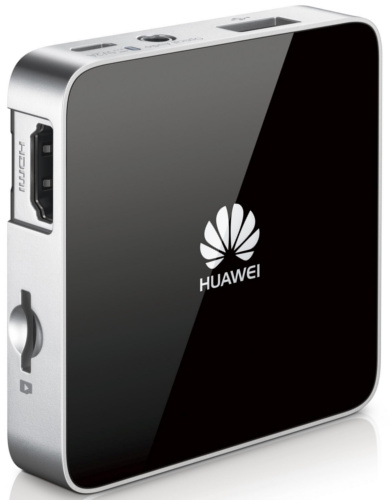 Pre-installed with games including Ducati Bike and Breaker's Revenge II that can be played using tablets or game consoles, it comes with a powerful consolidation function which automatically sorts and organizes files from PCs, mobile hard disk drives, and other storage devices. Additional accessories include a universal learning remote that controls the MediaQ, Set Top Box (STB), TV, and other digital devices, software converting smartphones into the MediaQ mouse and keyboard controllers, and a type-Y power cord to connect jump drives and mobile hard disk drives.

Pricing and availability is TBA.