The Huawei Mate 30 Pro has launched and it's a beast...on paper. Full SPECS inside

Huawei has just officially announced their Mate 30 series devices, and I’ll be honest with you, the flagship Mate 30 Pro is mental.

If you’ve been following Huawei devices, you’ll know they have two launch cycles in a year. The P series comes at the beginning of the year and mainly feature camera improvements, while the Mate series at the end of the year gets a new processor overhaul. And because of this, the Mate series is the one that has the most innovation because next-generation processor capabilities usually mean unlocking features that were impossible before.

Case in point, while the P20 Pro finally made people take Huawei seriously as a mobile photography powerhouse, it was the Mate 20 Pro that delivered on a slew of world’s firsts and innovation. In fact, we liked it so much, we outright called it our smartphone of 2018. Similarly, this year's P30 Pro had a revolutionary camera, but that was basically it's appeal.

So, if the Mate 20 Pro was any indicator, you know that Huawei was always going to pull out all the stops for the Mate 30 Pro, and they have. I’m going to ignore all the drama going on with the US trade ban and Google Android in this article because those are unfortunate external incidents that would otherwise not have affected the development of this device. You can follow that particular topic here. The main upgrade for the Mate 30 and Mate 30 Pro is the Kirin 990 5G SoC. It’s developed based on a 7nm+ architecture with three-levels of power efficiency. Obviously, this is going to be a much faster processor than the Kirin 980; it’s also going to feature an upgraded NPU cluster for even better on-chip AI processing. The Kirin 970 introduced the NPU into the chipset, then the Kirin 980 doubled that with Dual-NPUs. The Kirin 990 has what Huawei is calling the Da Vinci NPU, which seems like the Dual-NPU + 1 additional small NPU core.  It’s also going to be even more power efficient than previous generations.

However, the main upgrade of the Kirin 990 is already in its name. This is probably the industry’s first fully integrated 5G mobile chipset. Unlike other brands that may choose to selectively release a 5G version of a device, both the Mate 30 and Mate 30 Pro will natively support 5G (NSA and SA modes) right out of the box wherever you buy them. Huawei is also claiming that the Mate 30 series will support up to 4K video calls with 5G. Of course, all the other staples are included: dual SIM, dual standby, full TDD/FDD frequency bands.

Since both the Mate 30 and Mate 30 Pro will run on the same chipset, both phones will feature grapheme-based heatpipe cooling system. Huawei’s also claiming an AI-based thermal management as well as improved tolerance to low temperatures.

Just like the Mate 20 Pro, the Mate 30 Pro also gets a camera upgrade. And there is a lot to digest here. The Mate 30 Pro will feature a quad-camera setup like the P30 Pro comprising main, ultra-wide, telephoto, and depth sensors.

However, the Huawei’s focus for the Mate 30 Pro is clearly to be a video powerhouse. We saw a little of this direction with the Mate 20 Pro when they released AI-powered live video filters, and gradually improving ISO sensitivity over the past two generations. With the Mate 30 Pro, these specifications are insane. 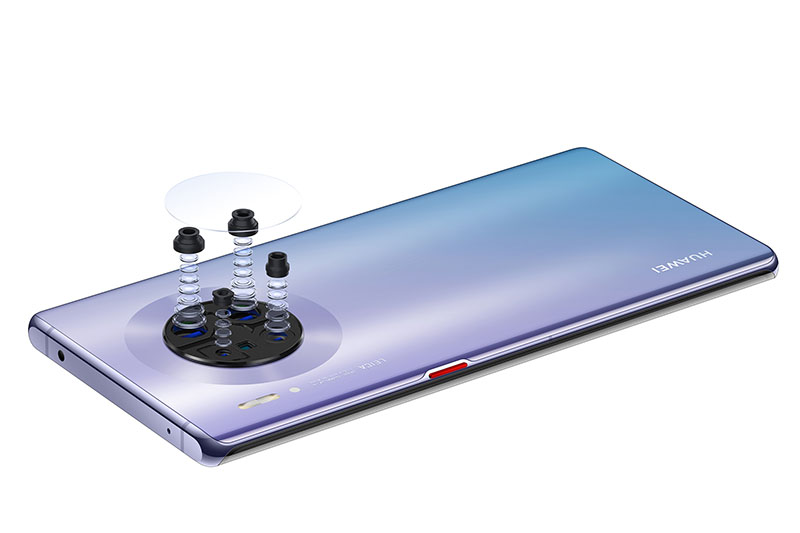 It will feature TWO 40MP sensors in what Huawei is calling their Cine Camera System that will provide the best of both worlds for photography and videography. The first one is the one we saw introduced with the P30 Pro. This is the 40MP SuperSensing sensor that features the unique RYYB filter array. This is a 1/1.7-inch sensor with an ISO rating up to ISO 409,600 and built-in optical image stabilisation (OIS).

The second 40MP sensor takes over the ultra-wide role and also doubles up as the main video sensor. This is a larger 1/1.54-inch sensor capable of shooting low light video up to ISO 51,200, 4K ultra-wide time lapses and ultra slow-motion up to 7,680fps! What?

The 8MP zoom sensor will allow 3x optical, 5x hybrid and 30x digital zoom. This is less than the P30 Pro, but consistent with Huawei’s segmentation of the P and Mate series devices. The last depth sensor will provide better depth of field effects to help out bokeh, 3D model scanning and AR features.

The vanilla Mate 30 is distinctively more mundane. It will come with a standard triple camera setup of a 40MP SuperSensing main sensor, 16MP ultra-wide and 8MP zoom.

Horizon Display and the gaming factor

The Mate 30 Pro will feature a sort of wrap around display where the screen curves all the way into the sides to give an illusion that there isn’t even an edge. Huawei’s also taking advantage of this to give the Mate 30 Pro a little feature that might be of interest to gamers. Because the screen wraps around the edge, Huawei’s taken away the physical volume buttons from the side. Instead, you get programmable and movable virtual buttons. This doesn’t just mean you can move them from left to right depending on your hand preference, but you can also move them to along the length for better positioning when in landscape mode for photography or, supposedly even gaming bumpers.

As with the P30 Pro, the Mate 30 series will feature acoustic display technology so there’s no real speaker on the top but the screen vibrates where your ear is to produce sound. Both the Mate 30 and Mate 30 Pro will also feature in-screen fingerprint sensors. These are said to be updated as well and will unlock within 0.5 seconds.

The Mate 30 will have a more traditional screen and physical buttons, though it will be a larger phone. And they’re both massive OLED displays. The Mate 30 Pro is a 6.53-inch device, while the Mate 30 is 6.62-inches. The Mate 30 Pro will come with a 4,500mAh battery while the Mate 30 will have a 4,200mAh battery. Both phones support 40W SuperCharge that lets you charge up to 70% in 30 minutes. The phones also get a huge wireless charging bump from 15W in the Mate 20 to a 27W Wireless SuperCharge. In a surprising twist, the Mate 30 Pro will feature a both glass and vegan leather backed variants, though we understand that Singapore may only get the glass version, and only two out of the possible six colours.

Join HWZ's Telegram channel here and catch all the latest tech news!
Our articles may contain affiliate links. If you buy through these links, we may earn a small commission.
Previous Story
The Mate 30 series will not come with Google Mobile Services but Huawei remains upbeat
Next Story
Blizzard's SEA Invitational offers an early look at some Overwatch World Cup action