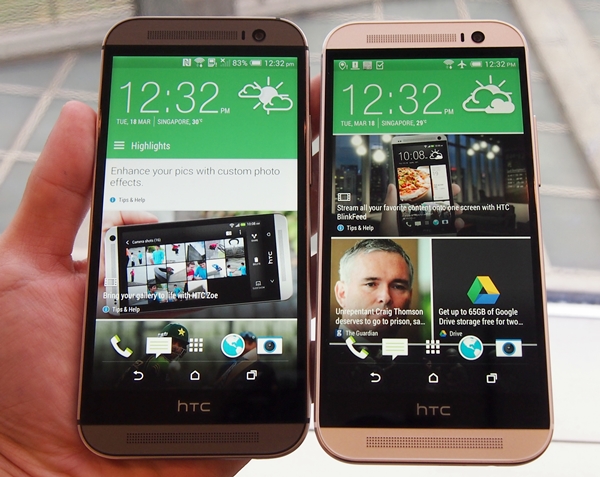 HTC today introduced its latest Android flagship smartphone, the One (M8) which will take on the recently announced Samsung Galaxy S5 and Sony Xperia Z2. While the "M8" moniker used to be its codename, it seems HTC wants to continue the "One" branding and just tagged on the codename the differentiate it from the existing HTC One.

The One (M8) sports a slightly larger display at 5-inch, which is an increase of 0.3-inch from its predecessor. The display resolution remains at Full-HD (1,920 x 1,080 pixels) though.

In terms of design and build quality, HTC outdone itself again by using an all-metal (aluminum alloy, 90%) body for the One (M8). The Gunmetal Grey model will have a different brushed finish compared to its Glacier Silver counterpart. There is also an Amber Gold model, but we were told it would not be available in Singapore at launch.

The Oppo N1 may have a unique rotating camera, but HTC goes up a notch by equipping the One (M8) with dual rear cameras. Simply known as Duo Camera, the One (M8) has a refined primary 4-megapixel UltraPixel camera sensor with BSI, pixel size 2.0um, sensor size 1/3-inch, f/2.0 aperture, 28mm wide angle lens and HTC ImageChip 2 for taking photos; a secondary camera that works in tandem to capture depth information to create special imaging effects such as shallow depth of field, capturing multiple focus points and much more. It also has a front-facing 5-megapixel camera with BSI sensor, F2.0 aperture and wide angle lens that greatly improves video conferencing and especially for taking high quality 'selfie' shots with ease.

Running under the hood is the new Qualcomm Snapdragon 801 quad-core 2.5GHz processor, 2GB RAM, Android 4.4 KitKat OS with HTC Sense 6. In a nutshell, Sense 6 has a simplified, flattened design which focuses on making things easier for users. Some of its new features include on-screen navigation buttons, color coding for different tasks, improved keyboard and Motion Launch gestures.

Other specs of the One (M8) include 16 or 32GB internal storage, a microSD memory card slot (supports memory cards up to 128GB in capacity), Duo flash (twin LED Smart Flash), and a non-removable 2,600mAh battery.

The One (M8) is available in Singapore in the first week of April. Pricing is not known at time of publication, and we will update this section when we have more information.

Meanwhile, check out our hands-on article for more photos and features that we've tested on the HTC One (M8).