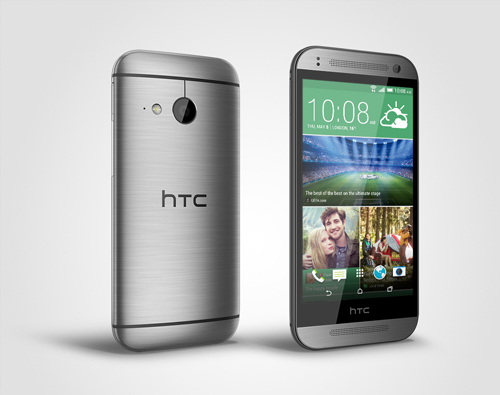 Like the flagship One (M8), the One Mini 2 sports an aluminium back which comes in three colors (gunmetal gray, glacial silver and amber gold). However, it has a plastic border around the 4.5-inch 720p display. Located at the top and bottom of the display are the stereo BoomSound speakers.

Running under the hood are a Qualcomm Snapdragon 400 quad-core 1.2GHz processor, 1GB RAM, Android 4.4 KitKat and Sense 6. HTC also replaced the UltraPixel rear camera with a 13-megapixel camera with BSI sensor and an aperture of f/2.2. There is no Duo Camera, which means that you will not get the fanciful camera effects such as UFocus.

The One Mini 2 is available in 16GB storage capacity and has a microSD memory card slot that supports cards up to 128GB. Other specs include 4G LTE connectivity, GPS with GLONASS, Bluetooth 4.0 and a 2,100mAh battery.

HTC states that the One Mini 2 will be available in Europe, Middle East, Africa and Asia from June 2014. Unfortunately, we were told by HTC that it has no plans to bring the device into Singapore.

Join HWZ's Telegram channel here and catch all the latest tech news!
Our articles may contain affiliate links. If you buy through these links, we may earn a small commission.
Previous Story
Xiaomi Announces the 7.9-Inch Mi Pad, An iPad Mini Killer with NVIDIA Tegra K1
Next Story
HKT and Huawei Launch World's First Seamless VoLTE Service in Hong Kong