Updated at 4.11PM: StarHub issued a response to the issue, which you can find below:

StarHub - "We alerted HTC that a small number of the HTC One (M8) phones could not recognize SIM cards. HTC has advised us that they are investigating the matter. For our customers who face this issue at point of purchase, we will replace the defective device immediately. Current HTC One (M8) users should contact HTC directly or visit their service centre for assistance.”

The main reason why some consumers avoid buying the first batches of a new smartphone is a fear that they would come with hardware and/or software issues. This seems to be the case for the recently launched HTC One (M8), where users reported that they received SIM card error messages multiple times throughout the day. 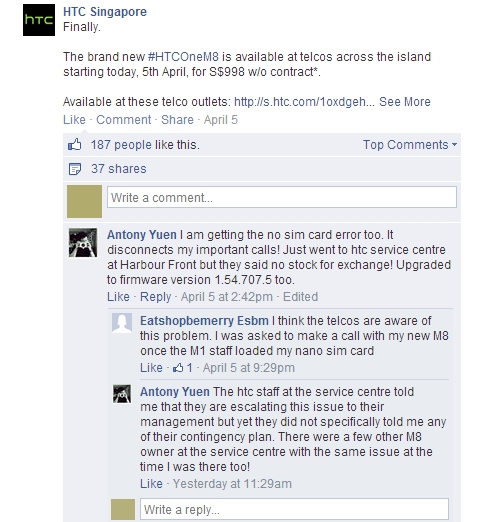 User Antony Yuen, who posted his feedback on HTC Singapore's Facebook Page, said that the SIM card issues disconnected his important calls. He added that there were other M8 users at the HTC Service Centre with similar issues.

We did a check on the HTC M8 thread in HardwareZone forums and found similar feedback from other users. Holyxiaoxin posted that he encountered the SIM card issue four times in the past 24 hours even after the telco had changed the SIM card. Another user, coconutty, commented that "the insert sim card logo can go on and off repeatedly at times".

The SIM card issue is not isolated to one telco; dlubis, another M8 user tried to use nano-SIM cards from all three telcos and still encountered the same problem on his phone. Dlubis stated that the SIM card issue usually occured after using or charging the phone for a while.

Apparently, the SIM card issues are also reported in one other country; one M8 user from U.S telco Sprint has reported similar problems on Android Central forums.

We've reached out to HTC Singapore and the three telcos for comment on this matter. A local HTC spokesperson informed us that the company is aware of the issue and is conducting an investigation. While we have yet to receive any information from M1 and StarHub, SingTel replied with the following statement:

SingTel - "We haven’t received any feedback on such issues yet."

We will update this section when we have more information.

Join HWZ's Telegram channel here and catch all the latest tech news!
Our articles may contain affiliate links. If you buy through these links, we may earn a small commission.
Previous Story
Guess Which Xiaomi Phones Are In the List of Top 10 Global Best Selling Smartphones?
Next Story
Sony Introduces 9 New 3LCD Short-Throw and Ultra-Short-Throw Projectors