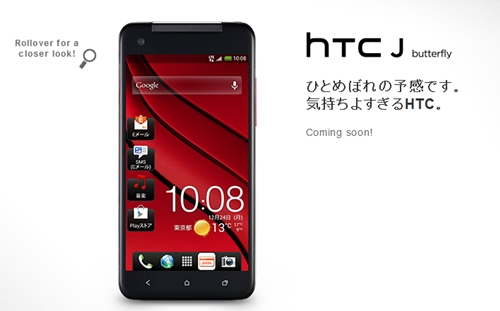 Yep, HTC has finally put rumors about an upcoming 5.0-inch smartphone to rest - the team at The Verge managed to get their hands on its new flagship smartphone device, the HTC J Butterfly. Its 5.0-inch Super LCD 3 screen puts it slightly bigger than Samsung's flagship Galaxy S III / S III LTE and marginally smaller than the Galaxy Note II. Otherwise, other high-end specs include:

Of course, the real attraction lies in the phone's rather astounding screen that relies on a panel that can pump out 440 pixels per inch, ensuring clarity all round. And according to The Verge, it sounds pretty impressive:

The Verge - "The real attraction, though, is the 5-inch full HD Super LCD 3 screen — it's truly a sight to behold. The Super LCD 2 seen in HTC's previous flagship One X was arguably the best panel on the market, but we think its successor is the new champion. Color reproduction is excellent, the 440ppi resolution is astonishing, and the screen's slightly curved edges make the image look like it's melting off the side of the phone."

Unfortunately, according to The Verge, "this is a Japan-specific model and almost certain to stay that way". Good news though: HTC reps has mentioned that its display will be making its way into other phones around the world. The HTC J Butterfly will land in Japan in December via AU / KDDI.