HTC confirms Android N coming to the HTC 10, One M9 and A9 smartphones

HTC confirms Android N coming to the HTC 10, One M9 and A9 smartphones 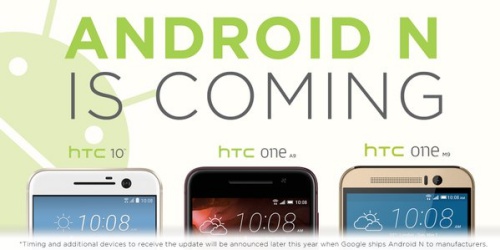 With Android N rolling out to Nexus devices later this year, one Android vendor has jumped in to confirm that it will be updating some of its handsets to the latest Android version.

HTC confirmed in a tweet that Android N is coming to the HTC 10, the One M9 and One A9 smartphones although the timing will be revealed after Google ships the source code to manufacturers. The Taiwanese company also states that additional devices to receive the Android N update will be made known later this year.

This is nothing new for HTC; it was one of the first (if not the first) Android vendor to confirm the roll-out schedule update of Android 6.0 Marshmallow for its devices last year. It also went the extra mile to come up with a massive infographic explaining the complicated and lengthy process of getting an Android OS update.

Join HWZ's Telegram channel here and catch all the latest tech news!
Our articles may contain affiliate links. If you buy through these links, we may earn a small commission.
Previous Story
Cooler Master unveils MasterCase Maker 5, a modular chassis that can be upgraded (Updated)
Next Story
Fitbit acquires mobile payment firm Coin, plans to launch NFC payment solution