HP’s Spectre Folio is a 13.3-inch convertible that looks like a leather book when closed (Updated)

HP’s Spectre Folio is a 13.3-inch convertible that looks like a leather book when closed 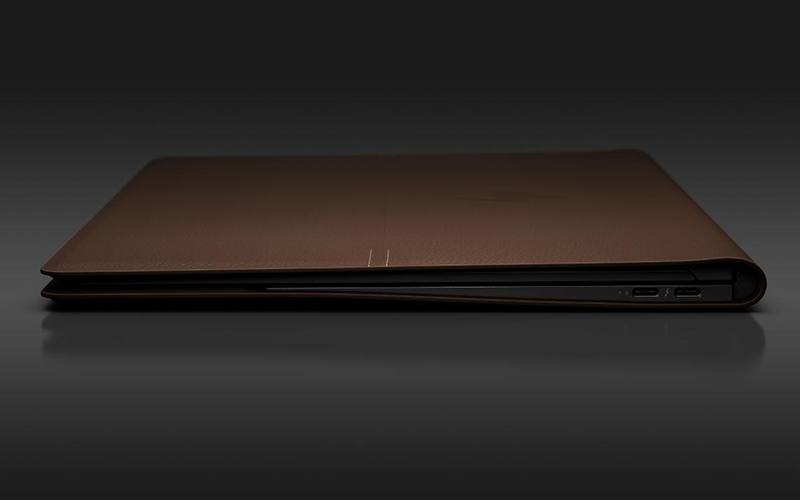 Updated on 30 January 2019: Added details on local availability and price.

What’s a company to do to stand out in a saturated ultraportable market? Experiment with different materials, according to HP. The company has announced the HP Spectre Folio, a 2-in-1 laptop that’s clad in leather.

HP says it’s using 100 per cent genuine, chrome-tanned full grain leather on the exterior and the outer keyboard, an interesting approach that may appeal to those who want something other than cold, unfeeling metal. The laptop will be available in two colors, Cognac Brown and Bordeaux Burgundy.

However, HP has done more than just wrap the Spectre Folio in leather. It’s clear the laptop was built around the leather and the design has been tweaked to better show off the material. Instead of simply folding the display around backwards to use it in tent or tablet mode – which would obviously obscure the leather – you slide the display forward over the keyboard.

This allows magnets to latch onto the display at the edge of the keyboard or at the edge of the laptop’s base, while still showing off the leather. HP even designed the laptop to fold shut like a magazine, complete with a spine and the appropriate stitching. Here's our unboxing and first impressions:-

The keyboard itself is aluminum, featuring chiclet keys and a 1.5mm key travel distance. The laptop also has a magnesium frame, which attaches to the leather and holds a small motherboard that leaves room for a larger 54.28Wh battery. HP is talking up the Spectre Folio’s battery life here, claiming up to 18 hours on a single charge.

The display also uses Intel’s Low Power Display Technology, which takes the form of a 1W LCD panel made by Sharp and Innolux. The screen is the biggest battery drain on any mobile device, and the low-power panel has clearly helped HP extend its battery life claims.

HP will ship the Spectre Folio with its Digital Pen, a stylus with tilt support and over 4,000 levels of pressure sensitivity.

The 5W processor also means that HP has been able to go with a fanless design here. Finally, for connectivity options, you get two Thunderbolt 3 and one USB 3.1 (Gen 1) Type-C port.

It is available now in Cognac Brown at S$2,799. A Bordeaux Burgundy model will be available in late February.