How much space does HBM really save over GDDR5 memory? A lot as it turns out

How much space does HBM really save over GDDR5 memory? A lot as it turns out 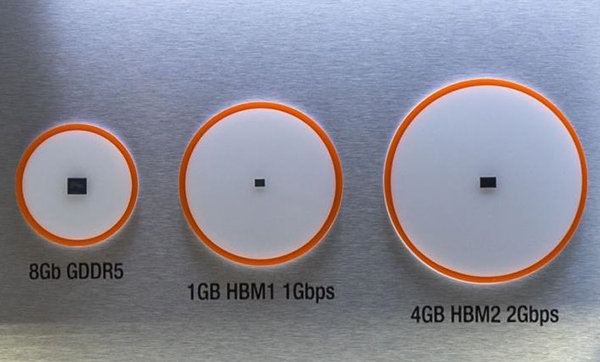 When AMD first released the Radeon R9 Fury X, its first card equipped with High Bandwidth Memory (HBM), it took care to highlight the space savings that HBM enabled. But these amounted to mostly graphical representations and vague numerical figures – 672mm² vs 35mm² – that didn’t do a lot for the imagination. But at GTC this year, SK Hynix had some HBM memory on display, helpfully providing a look at how much space the new memory technology actually saves in real-world terms.

One thing to note is that while the second-generation HBM2 memory die is larger than that of HBM, it is still smaller than an 8Gb GDDR5 die despite packing 4x more memory. Smaller memory dies enable more compact GPUs with higher memory densities for a range of consumer, scientific, and professional applications, and even GDDR5X memory, the updated GDDR5 standard, cannot compare.

HBM2 is already featured in NVIDIA’s Pascal Tesla P100 GPU, but there is still no clear indication when we’ll see the new memory type in the consumer space. Case in point: AMD’s upcoming Polaris GPUs appear poised to still make use of HBM or GDDR5 memory.